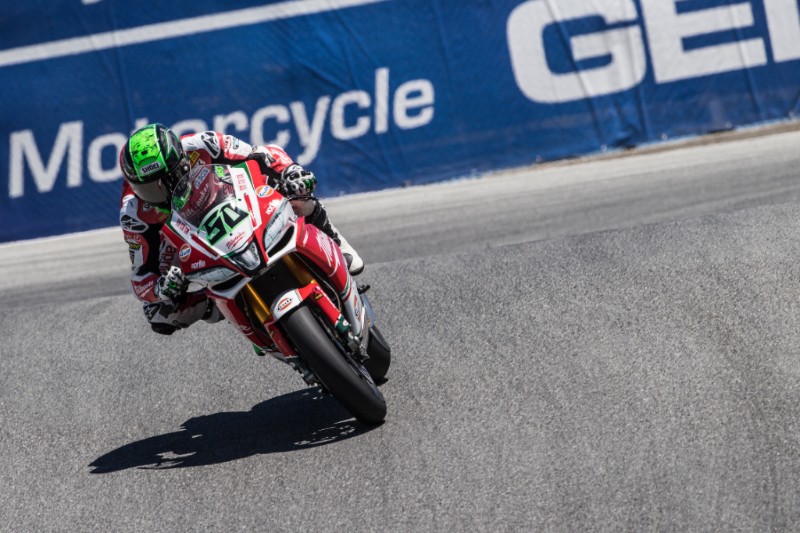 Milwaukee Aprilia continued their impressive 2018 form as Eugene Laverty took a strong fourth place after a battling ride in Race One at Laguna Seca.

The Superpole 2 session was another encouraging performance by the team, Eugene and Lorenzo taking P4 and P6 on the grid respectively. Both attempted a final flying lap in the last minute before yellow flags came out for a crash and the session was abandoned.
At the race start both riders got away cleanly, dicing with Lowes into turn 1. Lorenzo came out on top, taking P4 ahead of Lowes as Eugene sat in P6.

Running close to the leaders’ pace it looked set to be a race-long battle between the three. Lowes passed Lorenzo on lap 2 but was still in range, until a mistake by Lorenzo on the final corner caused him to lose the front and spin out. He recovered his bike and re-joined in last place and began his damage limitation, but another crash at turn 8 hampered him further. He recovered again and continued racing, and ultimately took 2 points in P14 following retirements for riders in front.

Eugene kept the pressure on Lowes and stayed within a second of him. A problem for Sykes in P3 on lap 9 caused him to drop back and he ended up sandwiched between Lowes and Eugene. As Lowes pulled away Eugene was forced to wait for his moment to attack and passed Sykes on lap 13. He carried his momentum and continued to close the gap on Lowes but just ran out of laps to pass, and came home a well-deserved P4 to equal the team’s best result.

Eugene will line up in pole position for the second race in succession for Race 2 under the reversed grid regulation.

Eugene Laverty #50
“We’ve got to be happy with the race, qualifying and then finishing in fourth was a good result, and the podium wasn’t far away. I lost some time in the middle of the race trying to overtake Sykes, once I got past him I went after Lowes but there just weren’t enough laps left to pass him. It felt so good though to have rear grip here, which has been a problem for me this year. We can get a good lap behind us now if we understand how to get rear grip and that has been a big breakthrough.”