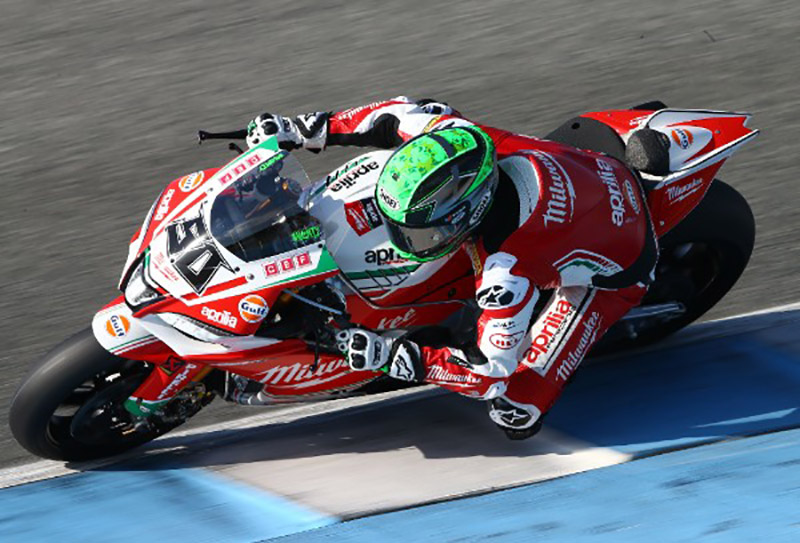 After the team’s best Superpole session of the year saw him start in 6th place, Eugene Laverty made a quick getaway from the grid at a sunny TT Circuit Assen.

Battling with the Ducati of Xavi Fores and Yamaha of Alex Lowes for much of the race, both Eugene and teammate Lorenzo Savadori showed their mettle as they lapped consistently and forced some impressive passes on their competitors.

Although they had to manage separate technical issues towards the end of the race, Lorenzo and Eugene brought their RSV4 RFs home in 5th and 8th positions to rack up yet another double points finish for Milwaukee Aprilia.

In what has so far proved to be a highly competitive WorldSBK season the team are looking to further demonstrate their progress in 2017. With a first and second row start for the riders on Sunday, the team are hopeful of another strong showing at the high-end of the points.

The action continues at #DutchWorldSBK with Race 2 at 13:00 (local time) at TT Circuit Assen

Eugene Laverty #50
Grid: P6 / Race: P8, 8 points
“So far it’s been a really positive weekend, much better than the previous three rounds. Practice went well and qualifying on the second row was a big boost for us after we’d worked so hard. In the race I was able to have some good battles with the guys around me, and the bike was performing pretty well for me. It was a shame that the front tyre went off towards the end though, and we had a mechanical issue which held us back. The feeling on the bike is much better now, but we need to get on top of the front tyre issues we had because things like that can hurt us in the race. We still have a top five finish in our sights and that’s really where we should be right now.”