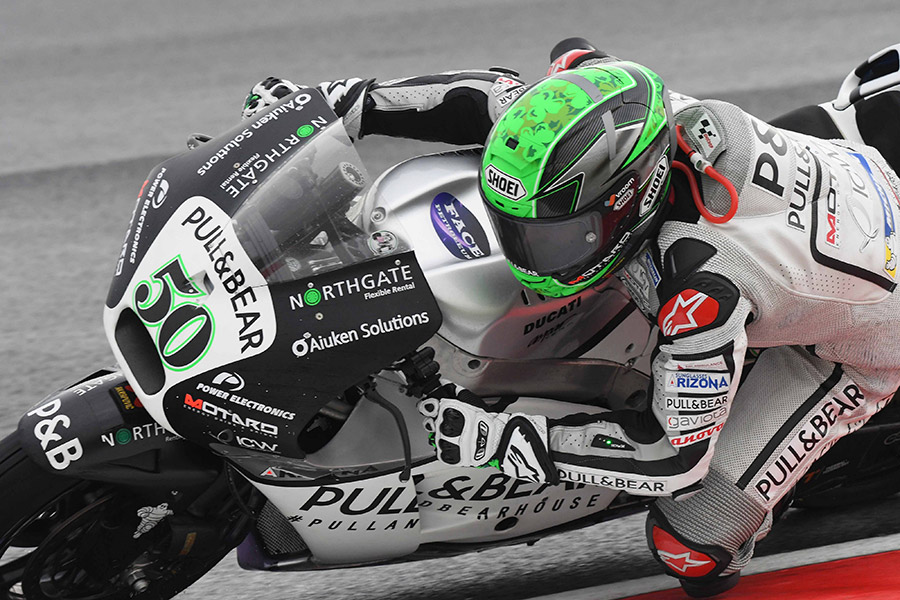 The penultimate race of the 2016 MotoGP World Championship was held up for twenty minutes after a huge rain shower soaked the Selang Circuit just moments before the scheduled start.

Once the race was able to start, with the distance reduced from 20 laps to 19, a group of five riders made their break from the rest: poleman Andrea Dovizioso, Valentino Rossi, Andrea Iannone, Cal Crutchlow and Marc Márquez. The first man to rule himself out of contention was the Brit, who went down eight laps from the end, followed a few corners later by Márquez, although he was able to remount and rejoin.

Andrea Iannone also went down on the next lap, leaving Valentino Rossi and Andrea Dovizioso to fight for the win. A small mistake and a couple of relatively slow laps from Rossi were all Dovizioso needed to become the ninth different winner of this season, the second on a Ducati. With Rossi second and Lorenzo third, the Italian is now confirmed as runner-up in the championship.

Pull&Bear Aspar rider Eugene Laverty brought his Ducati home in twelfth place after a difficult race that saw him lose touch with the main group over the opening few laps.

The Irishman struggled under braking in the soaking conditions but as the track dried his pace increased, allowing him to recover lost ground and set his best lap times on two of the last three laps.

Sadly it was too little too late for Laverty, who showed the pace to be fighting for at least eighth position today.

12th Eugene Laverty:
“I’m disappointed in myself because at the start I didn’t ride so good. I didn’t have a good feeling with the bike when there was a lot of water, I didn’t have confidence. Mainly I was losing in the braking. When the track wasn’t so wet my lap times were fantastic, my pace was fast like the guys at the front, so it is disappointing that I lost so much in the first six laps or so because the damage was done already. I came through strong to move up to twelfth and I was catching the group in front but unfortunately there wasn’t enough laps remaining to catch them and fight for maybe seventh or eight. It’s a missed opportunity but in the end the bike was good today.”