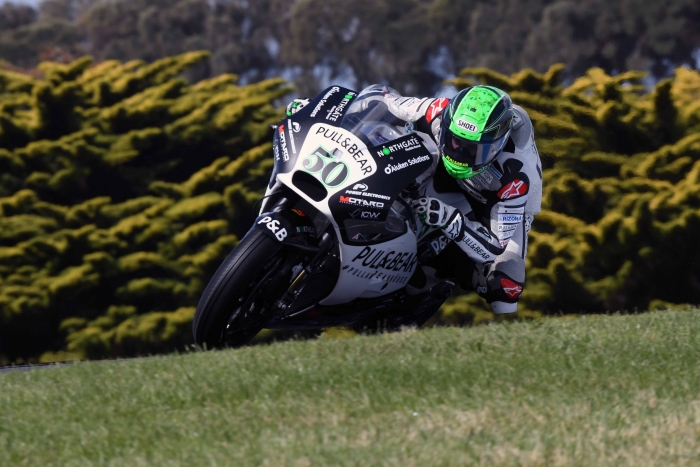 The MotoGP riders were afforded an extra fifteen minutes of free practice today after yesterday’s washout at Phillip Island, although the conditions were little better for an FP3 session that saw Valentino Rossi, Jorge Lorenzo and Maverick Viñales all miss out on direct qualification for Q2.

As Marc Márquez claimed his 65th career pole position ahead of Cal Crutchlow and Pol Espargaró, the fight for the runner-up spot in the championship sees Rossi and Viñales start from the fifth row of the grid, just behind Lorenzo. Warm-up for the MotoGP class tomorrow has been extended form the usual twenty minutes to half an hour, which will be crucial to prepare for whatever conditions await.

Pull&Bear Aspar Team rider Eugene Laverty was thirteenth fastest this morning, just four tenths shy of the top ten and direct qualification for this afternoon’s Q2. However, against the likes of Jorge Lorenzo, Valentino Rossi and Maverick Viñales in Q1 his best lap was only good enough for sixteenth position on the grid. Laverty is hoping for more stable conditions and a strong race tomorrow.

16th Eugene Laverty 1.41.532:
“Today we were close on a few occasions but it’s like that when the conditions are changing all the time. In FP3 we were just four tenths off qualifying directly for Q2 but we had to do Q1 in the end and again it was pretty close. So I’m disappointed to be sixteenth but on a day like today it’s all about timing and I wasn’t in the right place at the right time with the right tyre. It makes things interesting when the conditions are wet-dry-wet-dry but hopefully tomorrow will be more stable. If it is dry tomorrow then the guys who were in Q2 will be at an advantage because they have had fifteen minutes of relatively dry track time, whereas at the moment we would be going in blind. The warm-up should be dry, according to the forecast, so we’ll know where we are then. It’s been a crazy weekend and to have a dry race at the end of it would be bizarre.”