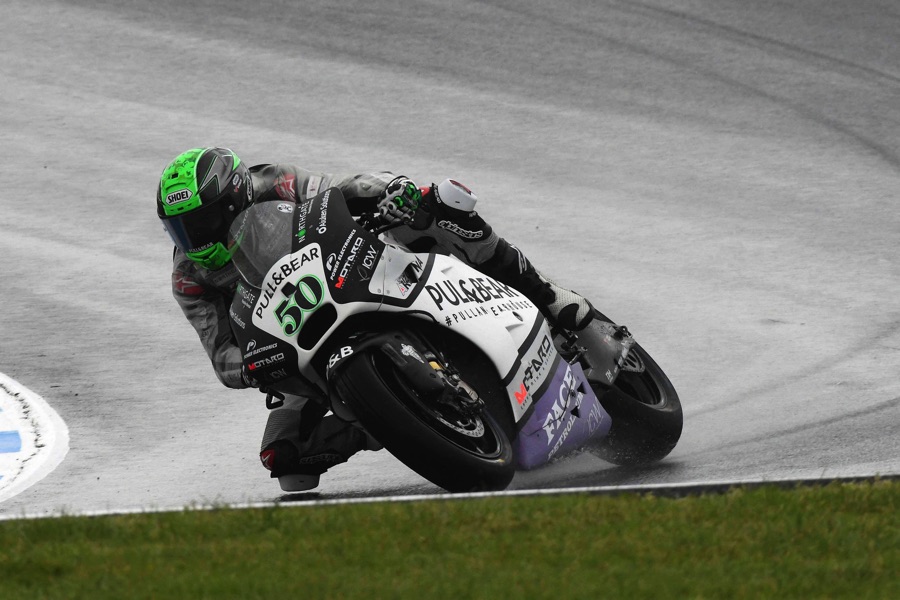 If the rain made life difficult for the MotoGP riders at Phillip Island this morning, it completely ruined their afternoon as the second free practice session for the Australian Grand Prix was cancelled after fifteen minutes due to the track conditions.

With some riders having only five laps under their belt today, tomorrow promises to be a key day as they look to perfect their bike set-up for Sunday’s race. Three independent team riders took the top three positions, with Cal Crutchlow (1’40.957) the only rider capable of breaking the 1’41 barrier ahead of Danilo Petrucci and local rider Jack Miller.

Marc Márquez made his first appearance as the new World Champion with the fourth fastest lap of the day, with Jorge Lorenzo and Valentino Rossi down in 19th and 20th place – in Rossi’s case due partly to a penalty for completing more than the permitted laps on the super-soft front tyre.

Eugene Laverty finished the day in sixteenth position, some 3.2 seconds off the top. The Irishman has shown good speed in wet conditions this season, most notably at Brno and Silverstone, although the lack of any dry track time at all today has denied him the crucial opportunity to find a base set-up for this track.

16th Eugene Laverty 1.44.181 (7 laps):
“It has been a tough start to the weekend. Usually when it rains we are strong, like at Silverstone or Brno, but on both of those weekends we had a dry session first to find a setting for the electronics. This time we haven’t had that so we are a little behind in that area. It was difficult to set a fast lap but at least we were able to gather some data.”