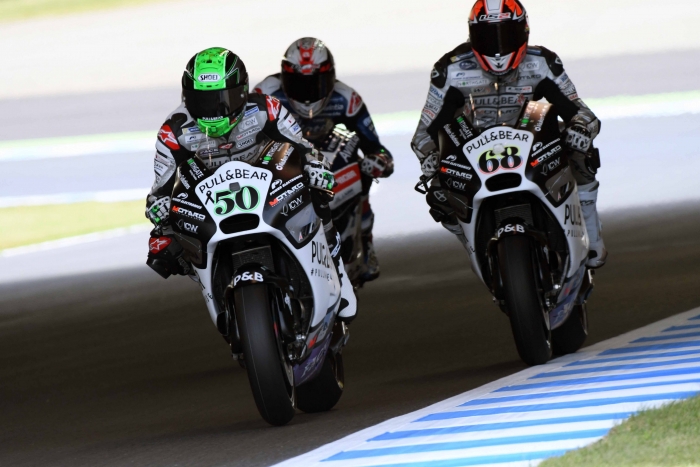 The Grand Prix of Japan maybe the first opportunity for Marc Márquez to secure the MotoGP World Championship title but the headlines were dominated today by his team-mate Dani Pedrosa, who broke his collarbone after a heavy crash in the second free practice session and is on his way back to Barcelona for surgery.

Pedrosa finished with the ninth fastest lap of the day, a second off pacesetter Jorge Lorenzo, who headed a top four from four different manufacturers. Andrea Dovizioso was just 0.05 seconds behind the leader, with a similar gap back to Maverick Viñales in third place, with Marc Márquez in fourth but comfortably three positions ahead of his main title rival Valentino Rossi.

Pedrosa’s injury wasn’t the only bad news today, with Pull&Bear Aspar rider Eugene Laverty also suffering a big crash on the first flying lap of his final run of the day. The Irishman had just switched to a soft rear tyre but was struggling to get it up to temperature when he crashed.

Medical checks at the circuit and later at the Dokkyo Medical University Hospital have ruled out any injuries although Laverty must wait for confirmation of his fitness from the circuit medics.

13th Eugene Laverty 1.46.853 (12 laps):
“The afternoon practice went very well. I started the session with the hard rear tyre, I was doing really good lap times with good rhythm and was up in thirteenth position. So at the end we tried the soft rear tyre and I noticed it was taking more time to warm up so I tried to be careful. But on the first lap I crashed at the fast turn six when the rear tyre spun up. I was quite lucky in some ways because it was a huge crash. Thankfully the scan results were all clear and I will look to ride tomorrow. I’d like to thank the staff from the circuit at Motegi, the MotoGP doctors and the Clinica Mobile staff for taking care of me.”