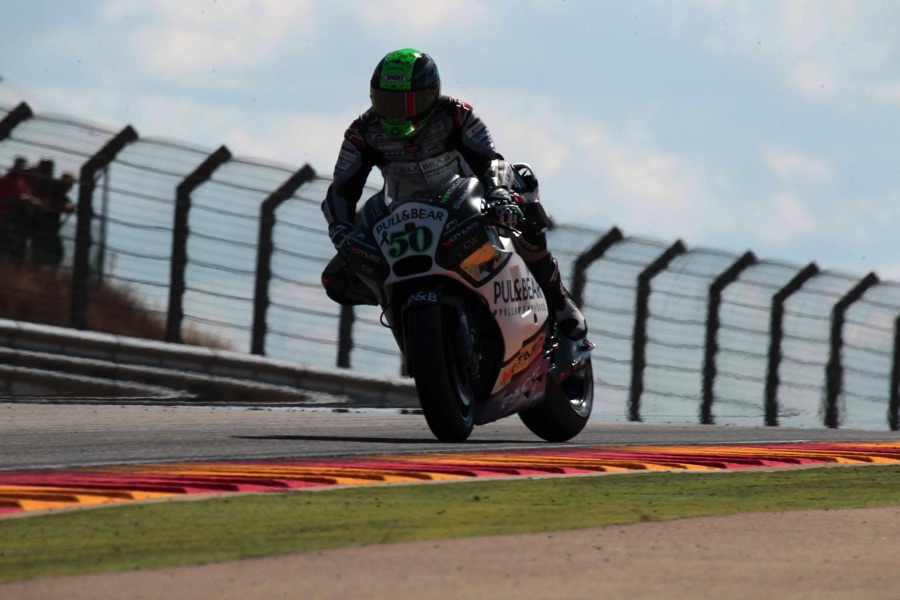 It was impossible for the run of different winners to last forever in MotoGP and finally today at the GP of Aragón it came to an end with Marc Márquez rounding off a dominant weekend with victory.

The Spaniard took his time to pick off early leader Maverick Viñales, but gradually he edged away at the front and marched clear to his fourth win of the season. Behind him Valentino Rossi did his best to limit the damage in the championship, making a late move on his team-mate Jorge Lorenzo for second place just a couple of laps from the end but running wide and having to settle for third.

Today’s result means that Marc Márquez can be crowned MotoGP World Champion for the third time with victory in Japan, should Rossi finish thirteenth or lower and Lorenzo fail to make the podium.

The fourteenth round of the season wasn’t the best for the Pull&Bear Aspar Team, with Eugene Laverty picking up consolation points in fourteenth place after a bittersweet race.

The Irishman started sixteenth on the grid but gradually picked up positions to get himself into the fight for the top ten. However, after a close battle with two rivals he ran wide in one of the final corners, just as the chequered flag was being prepared, dropping back to fourteenth but picking up two points that keep him in the hunt for a top ten finish in the championship.

14th Eugene Laverty:
“It wasn’t easy, the start of the race with the full tank was difficult but then I settled into it and got into a good rhythm with Pirro. I wanted to try and pass him towards the end and I got close in the slipstream on the brakes into the left-hander after the straight, but the front tyre was too soft and it started moving around and I ran off the track, which cost me a couple of positions. I could have been twelfth and we ended up fourteenth. Anyway, we’re not too far from the top Ducati so I think we can be quite content. For me the rear tyre wear wasn’t a big issue because with less grip it actually helps me a little to turn the bike but I was surprised with the condition of the front tyre so perhaps the harder tyre would have been the better choice today.”