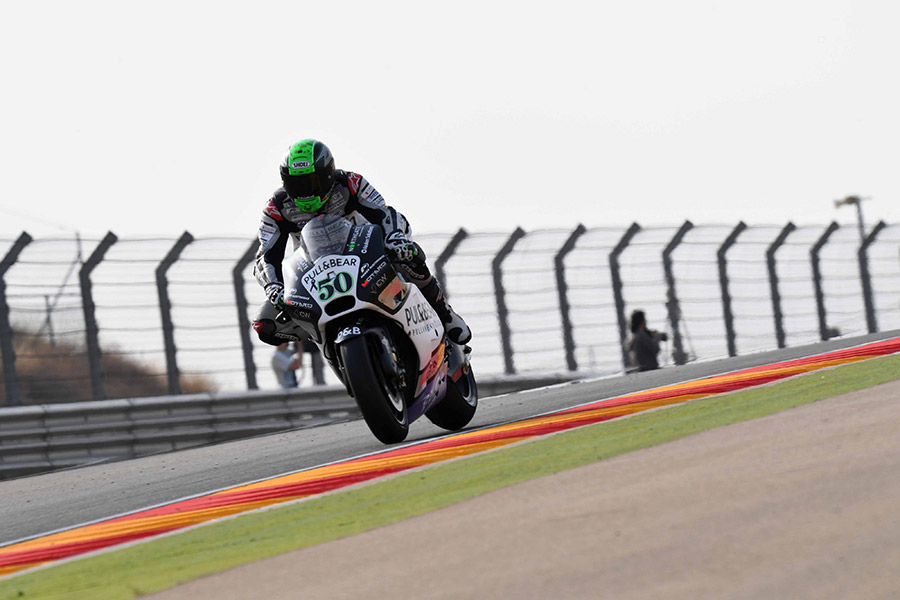 The possibility of seeing a ninth different winner in nine consecutive MotoGP races at Aragon this weekend already looks a slim one after the opening day of free practice, which saw Spanish pair Dani Pedrosa and Marc Márquez produce the kind of form that suggests a home victory on Sunday.

Pedrosa has his first victory of the season at Misano last time out still fresh in the memory and after lapping eleventh fastest in this morning’s opening session he found more than half a second on his final two laps of the day to top the time sheets. Valentino Rossi, main rival to Márquez in the fight for the title, was fourth fastest on a day that saw the top ten riders separated by just seven tenths of a second.

Pull&Bear Aspar Team rider Eugene Laverty suffered a more untimely crash than his team-mate today, sliding off on cold tyre just when he was about to push for a faster lap time on soft rubber.

Laverty was one of several riders to go down in turn two today but he is confident that he has the pace to challenge for a good grid position in tomorrow’s qualifying sessions.

17th Eugene Laverty 1.50.113 (20 laps):
“We made a real breakthrough with the bike in the afternoon. We made a big step with the turning of the bike and on the hard tyre I was making some really good lap times. Right at the end I crashed on a cold tyre after we switched to the soft, so I am angry about that because we had a genuine shot at a top ten. You don’t mind so much if you crash when you’re pushing but I wasn’t, I was trying to be careful but turn two is treacherous. So many riders have crashed there and today I joined the club! I am angry but we have to be optimistic with my pace on the hard tyre in the middle of the session, when I was riding with Viñales at the same pace. I know we can make a step on the soft tyre tomorrow and it’s always better to crash on Friday than Saturday or Sunday!”