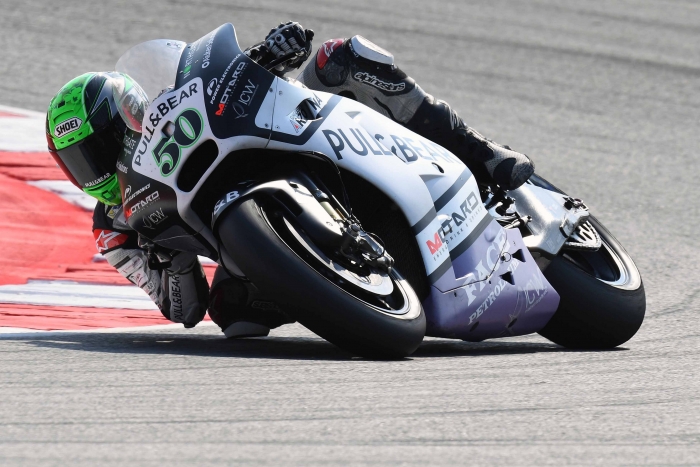 The MotoGP World Championship went from the cold of the later British summer to the heat of the Adriatic coast today as track temperatures hit 40ºC at Misano for the opening free practice sessions of the San Marino GP.

The heat was the main talking point of a day that saw Pol Espargaró, the Spaniard lapping six tenths shy of the fastest ever lap here with a time of 1’32.769 as only Dani Pedrosa and Andrea Dovizioso joined him inside the 1’33 mark.

Jorge Lorenzo was fourth fastest ahead of Marc Márquez and Valentino Rossi, with, Cal Crutchlow, Scott Redding, Héctor Barberá and Maverick Viñales completing the provisional top ten positions that would give direct access to Q2, with just 0.860 seconds from Espargaró to Viñales.

Xavi Forés today took the place of the injured Loris Baz, with factory Ducati rider Andrea Iannone now also a doubt for Sunday’s race after damaging his back in a crash this morning.

Pull&Bear Aspar Team riders Eugene Laverty and teammate Yonny Hernández finished the day in eighteenth and twentieth place respectively, the Irishman bouncing back from a crash on his fifteenth lap this morning to improve his pace on old tyres this afternoon.

Eugene has also made sure to save some fresh rubber for tomorrow as he launches his own personal quest to qualify for Q2.

18th Eugene Laverty 1.34.457 (32 laps):
“It has been a mixed first day, on the one hand I am disappointed with the first session because a crash halfway through made our work more difficult, but at the same time I am happy with the afternoon session. We worked with old tyres and set some good lap times. I wanted to focus our work in this direction and then we can use some fresh rubber tomorrow to try and make it into Q2. The crash was just because of a cold tyre – I was on my out lap and trying to be careful but wasn’t careful enough. With regard to the tyre choices we have here, the softs work better but we need to keep the temperature in them to make them work.”