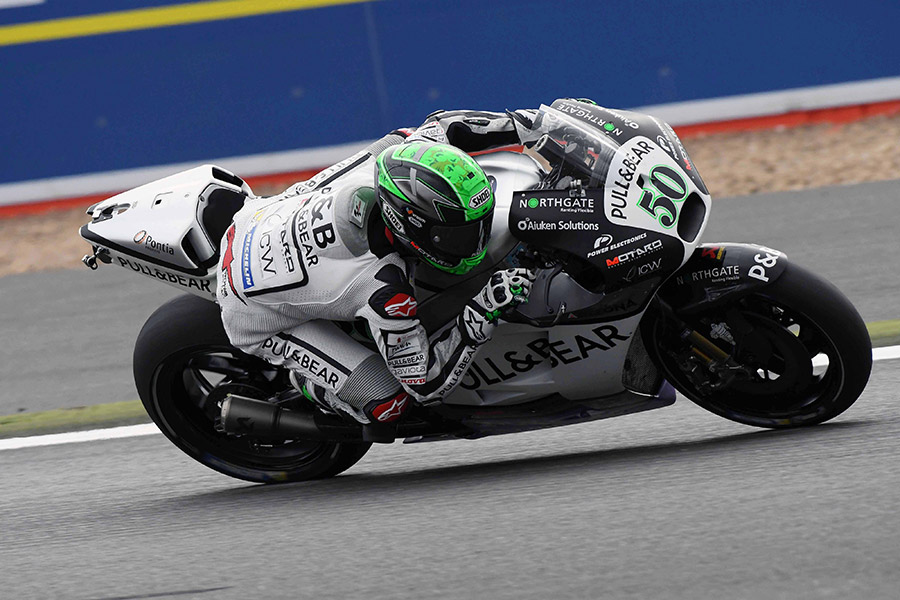 The British Grand Prix was halted no sooner than it was underway today after a crash involving Pol Espargaró and Loris Baz in between the first and second corners saw the race red-flagged on the first lap. At that point Cal Crutchlow was leading ahead of Pull&Bear Aspar Team rider Eugene Laverty in second place.

A restarted 19-lap race, reduced by one from the planned 20, saw Maverick Viñales make an early break and establish a three-second gap that he managed until the end, sealing his first win ahead of Crutchlow and Valentino Rossi.

It was the Spaniard’s first win and the first for Suzuki since 2007, whilst Viñales also become the seventh different winner from the last seven races in MotoGP. Rossi closes the gap by three points to Márquez at the top of the championship, which now stands at 50 with 150 available.

Eugene Laverty experienced contrasting fortunes in the two races, losing places after the restart until a collision with Stefan Bradl saw him drop back to last position. Despite damage to his bike Eugene equalled the pace of the top 10 to make his way back to twelfth.

12th Eugene Laverty:
“On the first start, the clutch felt really good off the line, I was fifth into turn one then got past Pedrosa for fourth and then Cal for third. When I passed Rossi for second I thought “this is going pretty good”! A corner later the red flag came out, unfortunately, so I had to do it all again. The clutch didn’t feel the same on the second start and then I got hit by a few guys including Iannone in the first corners. I also got locked together with Lorenzo. That sent me backwards and then Bradl collided with me when he crashed. Thankfully I didn’t go down too but it damaged the rear of the bike and that was it for my race. I had to stick my hand in there and pull the rear mud guard out, which isn’t nice with the chain and everything else in there spinning around! It was tough after that but we kept going and picked up four championship points.”