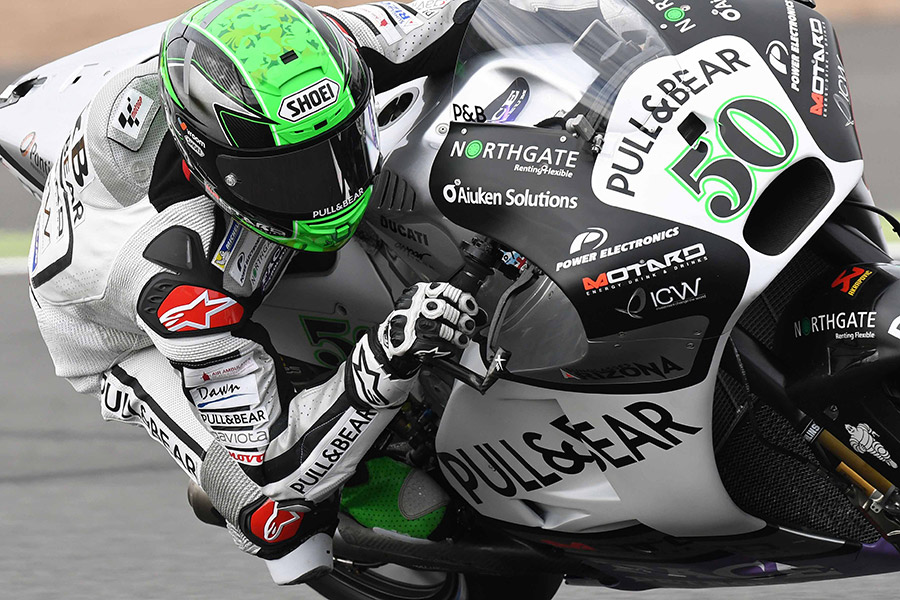 Cal Crutchlow carried the form that saw him take victory last time out at Brno through to qualifying for his home Grand Prix today as the British rider took pole position in wet conditions by a massive 0.998 seconds at Silverstone.

Crutchlow’s effort came halfway through the session and looked out of reach for the rest of the field until Pul&Bear Aspar Team rider Eugene Laverty emerged with a late attack that was ultimately foiled by a crash, leaving the Irishman in sixth place.

As such Valentino Rossi and Maverick Viñales will start alongside Crutchlow on the front row of the grid, with series leader Marc Márquez at the head of row two in front of his team-mate Dani Pedrosa and Laverty, who is the top Ducati on the grid with Redding, Iannone and Dovizioso on the third and fourth rows.

For the Pull&Bear Aspar Team it was hard to imagine how the day could get much better after Pecco Bagnaia’s pole in the Moto3 class but Eugene Laverty came within a few corners of equalling the feat in the premier class as he lapped inside the benchmark set by Crutchlow through the first two splits, only to lose rear grip and crash.

Laverty had made it through to Q2 by dominating Q1 but a small bike issue at the start of the decisive second session cost him crucial tyre temperature and, ultimately, the opportunity to dislodge his old rival Crutchlow.
The Pull&Bear Aspar Team are hoping it continues to rain tomorrow, to give Eugene the chance to shine once more.

6th Eugene Laverty 2’20.821:
“The second row is our best ever qualifying so I have to be happy in some ways but our potential was so high there. At the start of Q2 I had some problems with the bike and I had to pit in, then the tyres got cold and I just couldn’t get the temperature back in, it was like I was riding around on ice. On the last lap I could see on the big screen that Cal had a big gap so I knew I had a good chance to be second but I thought “why not go for pole?”. I had a shot at it but unfortunately the tyre was too cold and I crashed. It wasn’t for not trying, that’s for sure. Still, it’s always nice to shine when you have so many people supporting you; a second row start is good for us and now I will hope for this rain to keep up! If it is dry I will just try and hang on near the front and a top ten result, as always, will be our goal.”