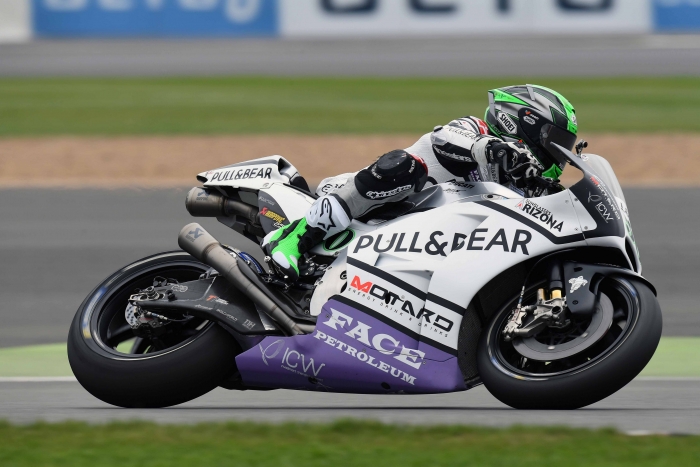 Four different factories took the top four spots on the opening day of MotoGP free practice at the British Grand Prix, with the Ducati of Andrea Iannone on top of the timesheets thanks to a lap of 2’01.421, which is inside the circuit record held by Dani Pedrosa.

However, the Italian’s pace was just short of a second shy of Marc Márquez’s fastest ever lap of this track, three tenths quicker than Maverick Viñales and half a second clear of Brno race winner Cal Crutchlow.

Behind the top trio are the three title contenders, Jorge Lorenzo lapping two tenths quicker than Marc Márquez and Valentino Rossi. With rain forecast tomorrow it will be an interesting wait to see if anybody’s times from today qualify them directly to Q2, with Andrea Dovizioso, Aleix Espargaró, Dani Pedrosa and Scott Redding currently holding top ten positions.

Eugene Laverty and teammate Yonny Hernández did more work than anybody today, the Pull&Bear Aspar riders clocking up thirty laps apiece as they prepared for a race that gets underway at 1530h BST on Sunday.

Eugene finished half a second off the positions that would qualify him directly for Q2, the Irishman enjoying the support of his fans here at Silverstone although his best lap was hindered by a rider getting in his way.

Eugene will be looking for more rear grip from his machine during what he hopes will be another dry day tomorrow.

14th Eugene Laverty 2’03.118 (30 laps):
“It was good to start the weekend with two dry sessions. To be honest I thought it would feel bumpier here than last year because that has been the case at most circuits this season with these tyres but actually it felt similar. Still, the bike feels unstable and there is not much grip out there. The main issue for us is finding some traction on the rear and putting down all this power we have to the ground.”