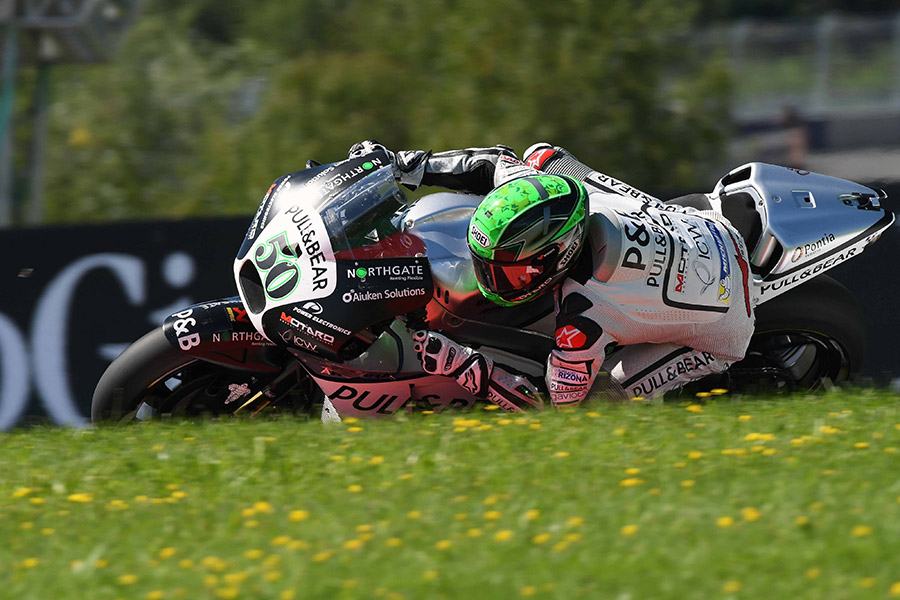 Ducati dominated the Austrian Grand Prix on Sunday, with Andrea Iannone taking the manufacturer’s first win since 2010 in a battle with teammate Andrea Dovizioso. The difference between the two at the end was just 9 tenths of a second, as Iannone claimed his first ever MotoGP victory.

Jorge Lorenzo completed the podium, ahead of teammate Valentino Rossi. With Marc Marquez –who suffered a shoulder injury on Saturday- finishing fifth, the gap at the top between him and Lorenzo now lies at 43 points. The MotoGP World Championship continues next week at Brno (Czech Republic).

The Pull&Bear Aspar Team riders suffered disappointment on race day in Austria, as neither Eugene Laverty nor Yonny Hernández were able to convert their progress over the weekend into points.

Eugene, who on Saturday had taken his best grid position in MotoGP, experienced bad luck at Spielberg when he was taken out on the final lap by Danilo Petrucci, after an intense battle between the two.

The Italian had clipped him several times on the last lap, and sent him to the ground on the final corner when he was in contention for eleventh place.

Eugene is joint tenth in the overall standings, but ended a great run of nine consecutive races in the points.

18th Eugene Laverty:
“I got a terrible start, but I made up some places on the early laps. Then I had a lot of spinning at Turn 5, followed by a huge amount of chatter, and I thought it might have been an electrical problem. Something happened with the tyre -we’ve looked at the data and it turns out the problem was with both the front and the rear. I lost a lot of time with it and that was when I dropped back. I was trying to salvage some points at the end, and was fighting for eleventh on the final lap with Petrucci. In my opinion, he was riding more than aggressively -it was too much. At Turn 3 he rode almost on the inside of me instead of overtaking. He hit me at the apex and then I repassed him on Turn 4. I defended the line on the final corner, and again he did the same thing -coming up the inside- and I crashed. I’m not happy, because it happened more than once from him. It’s cost me eleventh place and we worked too hard this weekend for someone to ruin things for us 200 metres before the line, and all for a single point.”