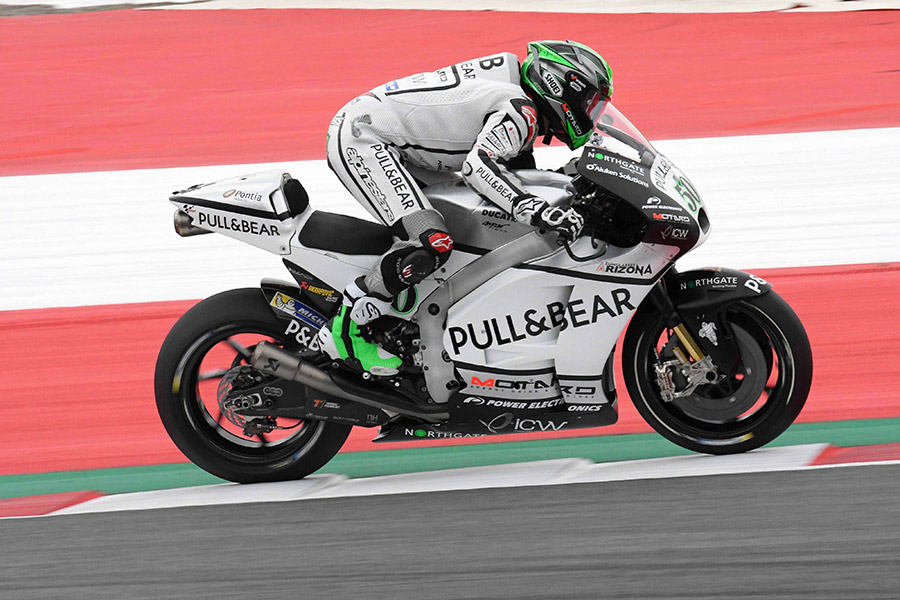 The Austrian GP weekend got underway on Friday with the opening practice sessions, dominated by Ducati riders. As had been expected after the two days of testing before the summer break, the Italian bike was well suited to the Spielberg circuit, and five of the Top 10 riders on day one were onboard a Desmosedici.

The fastest rider was Andrea Dovizioso, with teammate Andrea Iannone hot on his heels just over two tenths behind. World Championship leader Marc Márquez rounds off the top ten in the combined timesheet for the day, two positions behind title rival Jorge Lorenzo.

The Pull&Bear Aspar Team riders completed day one with mixed feelings. Eugene Laverty struggled after a crash in FP1, affecting his confidence for the rest of the day and preventing him from putting in more than five laps. The Northern Irishman managed to lower his times in FP2, racking up twenty laps.

21st Eugene Laverty 1.26.469 (25 laps):
“The morning was a bit of a disaster, culminating in a crash. Prior to that we had a technical problem and the bike stopped, so I had to come back on the sliproad and the tyres cooled. When I got back on track they were still cold and I crashed coming into Turn 8. That damaged my confidence. In the second session I struggled a bit to feel that confidence again, but in the end I managed to lower my time. In the final moments Iannone complained about me, telling me to use my head. If I was on a slow lap I would have accepted the blame, but I was on my fast lap and I don’t think that his complaint was correct.”