Eugene Interview: “I remember when MotoGP was just a distant dream” 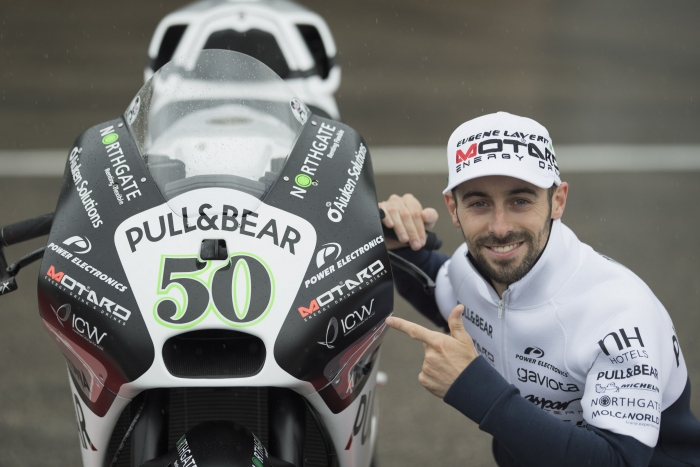 The Pull&Bear Aspar Team MotoGP rider Eugene Laverty considers his attitude, his humbleness and his hard-work have been key in bringing himself to the top level in this mid-season interview…

How is it like to come from Toomebridge, a little Northern Irish village, to the premier class of motorcycle Grand Prix. What is bike culture like in your country?

“I do have to pinch myself sometimes because I remember many years ago when the thought of racing in MotoGP was but a distant dream. One of my main focuses in life has always been to keep improving so in truth I climbed the racing ladder without stopping to take it all in. I think that’s the case for many riders though. We’re so focused that if often takes someone else to point out what we have achieved before it really sinks in. Bike culture is actually very popular in my country thanks to historic road races like the North West 200 and the Ulster Grand Prix. As a kid I grew up watching those races trackside amongst 100,000 other passionate fans.”

You don’t normally see three brothers competing at high level. What did your parents feed you?

“Considering it’s such a small place we really have an incredible number of world level athletes from Northern Ireland. It is even more incredible that we are three brothers from the same family! I believe our attitude has been key in bringing us to the top level as we are humble and hard-working. At the end of the day we are just people that work hard to do our job the best that we can, nothing more.”

You started racing at national level when you were fourteen. Why then, and not before?

“I competed in motocross when I was a child and then when I was old enough I made the switch to road racing. I enjoyed motocross but I never had that competitive edge until I switched to road racing. That’s when the fire in my belly was ignited and I discovered my true passion.”

Your racing career has been a little unusual, as you started into the GP, making the switch to World Supersport and World Superbikes and then coming back to GP…

“My path has been a little unusual but in turn it has made me into one of the most versatile riders out there. I have raced in four different categories at world championship level, plus I have won world championship races with four different manufacturers. I feel that this has taught me certain skills that perhaps riders with more conventional backgrounds do not possess.”

What attracted you to come to MotoGP in 2015, after having been runner up in World SBK in 2013?

“I’ve always been open to riding in both World SBK and MotoGP and so every year I consider options in both paddocks. For 2015 I weighed up my options in World Superbikes and MotoGP and felt that my best option was to fight for the MotoGP ‘Open’ title with the Aspar team. Unfortunately, the bike wasn’t as competitive as hoped but that’s racing.”

The number 50 has gone with you since your first days in racing until MotoGP, except for the World Superbike years in which you had to wear number 58. Why is #50 special?

“I first used the #50 back in 2002. The origin is very simple actually: I was competing for Technical Sports Racing (TSR) in the British Championship while Andrea Ballerini was competing for the same team in Grands Prix. I simply decided to use the same number as Andrea because I had no other preference at the time.”

At the halfway stage of the season now, how do you rate 2016 so far?

“I have already achieved one of my biggest goals for the 2016 season which was to improve my consistency. In recent years I felt that I put too much pressure on myself on race day and often crashed whereas this year I am one of just three riders to score points in every race. I’m very proud of this achievement as it shows that I have recognised a weakness and turned it around.”

One of the biggest moments in MotoGP so far this year is the fourth place in Argentina. Although that GP was your best one in 2016, in terms of points, you rate better the Spanish GP. How is that?

“While Argentina was a fantastic achievement it was a strange race. Many riders made mistakes whereas I remained calm and understood that the key that day was not to take big risks. On the other hand, I rode on the limit for the entire race in Jerez and finished just half a minute from the race winner. I knew that I couldn’t have done anything more, and that’s why I felt great satisfaction.”

“I am very aggressive in battle which comes as a surprise to many people due to my calm nature away from the track. I’m not content just to take part as I’m a true competitor at heart. The nature of competition is to win so if you can’t win then how can you be content?”

How is it for you working with a four-time World Champion like Jorge Martínez “Aspar”?

“I have a lot of respect for Jorge Martínez “Aspar”, not only for what he achieved as a rider but also as a team boss. He’s always there to give advice when I need it but at the same time he never intrudes. Even if we are struggling during practice on a particular weekend he allows us to work without giving added pressure. I believe that this is a big part of the reason why the Aspar team has been so successful over the years.”

What are your thoughts on the fight for the MotoGP title?

“It’s been a very exciting season so far with so many ups and downs among the championship contenders. For many years these guys had been riding the same bikes around the same circuits and so they got to a point where they made few mistakes. In 2016 both the electronics and the tyres changed so it’s mixed things up quite a bit.”

Can you see yourself on a factory bike one day?

“Right now I’m focused on doing the best that I can do with the tools that I have. Sure a factory bike would help a lot but there’s no point in looking across the fence at what your neighbour has. My job is to get the maximum from my equipment together with my team and so far we’re doing a fantastic job.”

How do you see yourself in the nearest future? Both in the professional and personal sides.

“I got married to my wife Pippa less than one year ago and we’re really enjoying married life. Life is good right now so I’m just taking things one day at a time. We’ve put together a great season so far and we’re well on course to achieve our aim of finishing in the top ten in the championship.”