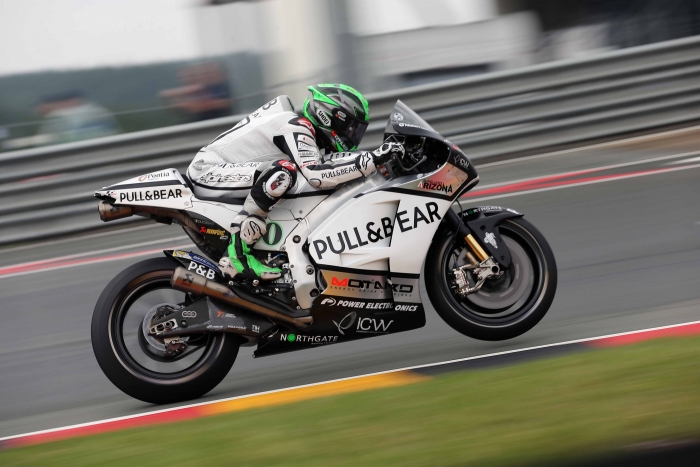 The rain at Sachsenring stopped falling before the start of the MotoGP race, and the track dried out sporadically due to a strong wind, presenting tricky conditions for the premier class field.

Marc Márquez showed the best timing with his bike change, rising from mid-pack after a run-off to the leadership of the race. He held his advantage after his rivals had realised his smart move, and took victory in the German GP. Second was Cal Crutchlow, with Andrea Dovisioso third. Eighth and fifteenth, respectively, for Valentino Rossi and Jorge Lorenzo meant that Márquez increased his lead in the overall standings.

The Pull&Bear Aspar Team claimed five points from a crazy race, thanks to Eugene Laverty’s eleventh place finish. The Northern Irishman is, along with Marc Márquez, one of only two riders to have scored points at every race so far this season, and remains tenth in the overall standings.

He came back from starting on the sixth row of the grid, and battled against the hindrances of several incidents ahead of him and a traction control issue. A change of bike resolved the problem, and Laverty was able to steadily lower his lap times to finish the German GP strongly.

11th – Eugene Laverty:
“Scott Redding was in front of me at the start and he spun up the rear tyre, so I had to close the gas completely. That left me quite far back on the first corner. It was certainly dramatic. Also, when Yonny crashed he nearly took me down with him –and I closed the gas again and lost some more positions. It was crazy out there. I was optimistic after this morning, but something really strange happened with the traction control setting in the wet and it meant that the bike just wouldn’t go; it was so strong that it felt as if I had half the power. That’s racing though. We made a stop and then we did a good job on the intermediate tyre, so all-in-all it wasn’t a bad race. I could have come in a few laps earlier, but I was looking at the sky and thinking that it was going to rain again –as it had been all day. It’s a bit of a gamble and it can either pay off or not”.