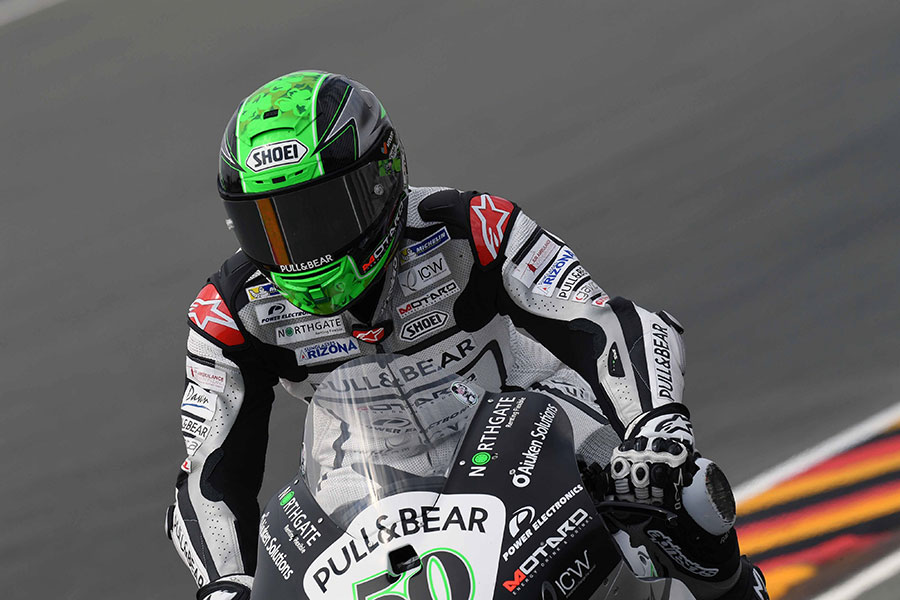 Marc Márquez scored the first pole position of his career at Sachsenring in 2010 on his way to his first world title and in seven years the Spaniard has yet to relinquish the best position on the grid, a remarkable record he continued today in MotoGP.

His effort today of 1’21.160 was eight tenths short of last year’s best but still four tenths clear of closest challenger Héctor Barberá, with Valentino Rossi completing the front row. The same gap separating first and second place – four tenths – also separates third to eleventh, which will be Jorge Lorenzo after a series of crashes for the World Champion, who will be joined on the fourth row by Dani Pedrosa and Pull&Bear Aspar Team rider Yonny Hernández.

Eugene Laverty starts eighteenth after making significant improvements this afternoon. Laverty’s crew made some changes to the geometry of his bike after this morning’s FP3, which immediately gained him almost two seconds per lap. After scoring points in each of the first eight races of the season, Laverty is determined to extend his run here in Germany tomorrow.

18th Eugene Laverty 1.22.567:
“The afternoon was so much better. When the bike is working better the lap time comes so much easier. In the afternoon I made a 1’22 easily and this morning I was on the limit to make a 1’24. It was impossible to go faster so I am happy with the work the guys did, just by changing the geometry we improved so much. We had a really good FP4, qualifying wasn’t as good because I lost the front and conceded around three tenths. We had the potential for fifteenth place on the grid and that’s a big improvement on where we were this morning. Lorenzo’s crash in front of me also distracted me but qualifying is qualifying, it is the race that matters and I am happy with our pace from FP4. Some other riders are spinning up quite a lot and that is not good for 30 laps but I feel optimistic we have a good setting and I am confident for the race tomorrow.”