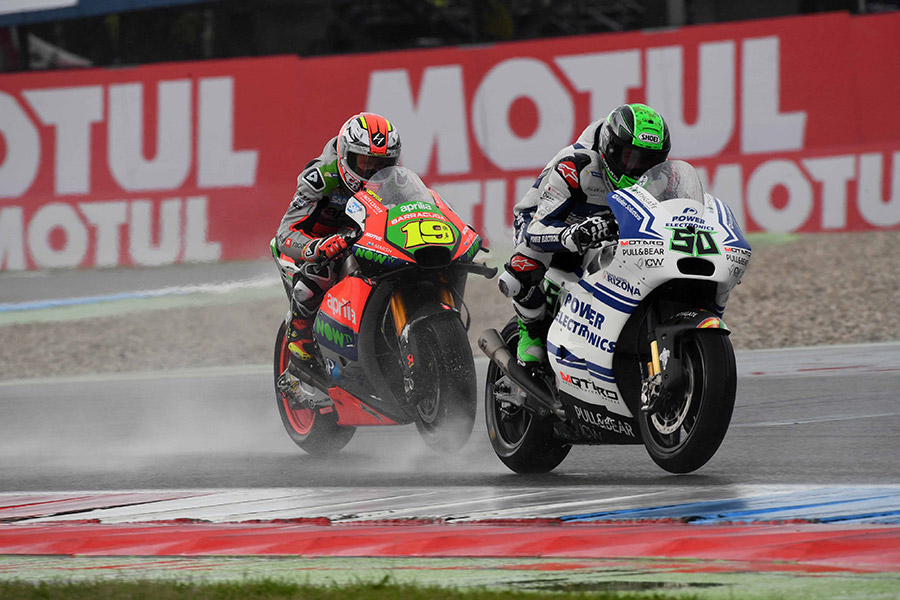 The Dutch TT was dominated by the rain today, with a downpour around an hour before the start of the race and another one after fourteen laps, which saw the race red-flagged and restarted for a twelve-lap sprint.

The star of the first part of the race was Aspar Team rider Yonny Hernández, who looked on course for a potential victory until he crashed after nine laps. Once the action had been stopped and restarted it was Jack Miller who took the surprise win, with Marc Márquez and Scott Redding joining him on the podium.

A crash for Valentino Rossi and tenth place for Jorge Lorenzo have helped Márquez move clear at the top of the standings as the season reaches the halfway point with the next race at Sachsenring in three weeks’ time.

After the crash of sometime race leader Yonny Hernandez all the Aspar team’s hopes rested on the shoulders of Eugene Laverty, who himself had started from pit-lane after a crash on the sighting lap. The Irishman was cut adrift from the back of the pack until the red flag appeared, which gave him the chance to make a fresh start and fight his way through to a creditable seventh place.

Nine valuable points from a dramatic Dutch TT move Laverty back into the top ten in the championship.

7th Eugene Laverty:
“I rode so slowly on the sighting lap because I didn’t want to be the idiot that crashed… but I did! The tyre just felt like ice, it was so slippery. I had to run back for the other bike but I didn’t think it was too bad because starting from the back of the grid was not too far from where we qualified. Then when I arrived at the end of pit-lane I could feel there was a problem with the front brake, which was stuck. That was why I struggled so much at the start of the race and dropped so far back. The second part of the race was good, I made a really good start and made up a lot of positions but from lap two to around lap six I kept losing the front, I almost crashed so many times and with so many other riders crashing out around me I had to be really careful. Over the last five laps the front tyre started to come better again and I was able to go really fast, we just ran out of time to catch the guys in front. Seventh place after so much drama is a good result.”