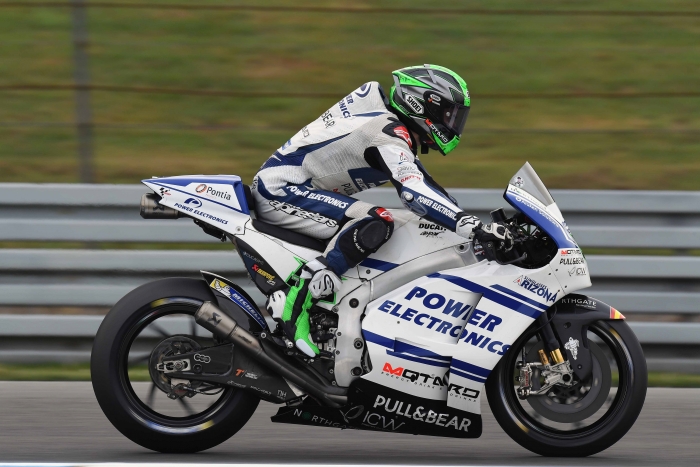 The long tradition of Dutch TT racing on Saturdays, which goes back as far as 1925, will end this weekend and as such it was a Friday that hosted the first free practice sessions today, with four factories finishing in the top four positions. Andrea Iannone clocked the fastest lap of Assen on his Ducati, with Valentino Rossi just 0.004 seconds adrift on his Yamaha.

Honda’s Marc Márquez, Suzuki’s Maverick Viñales and Jorge Lorenzo, on the second factory Yamaha, complete a top five that lapped within four tenths of a second today. With rain forecast tomorrow, the big surprise of qualifying could prove to be Dani Pedrosa, who was eleventh fastest today and may have to contest Q1 if conditions are inclement for FP3 in the morning.

The top Aspar Team rider today was Eugene Laverty, a lap of 1’34.789 in the second session representing an improvement of over a second on the first session. The Irishman crashed shortly before the end of the day in turn five although he escaped unhurt, lamenting a loss of front-end feel as he looked to improve the turning potential of his Ducati.

15th Eugene Laverty 1.34.789 (35 laps):
“We knew here that the biggest area for us to work on with the bike is turning and we made a good step today, although it meant that I lost some feeling with the front in corner entry and I confirmed that by crashing! Finding the right set-up is always about making compromises but ideally tomorrow I need to find some more front feel but keep a fast lap time.”