Eugene 11th at Le Mans, and 9th in the Championship 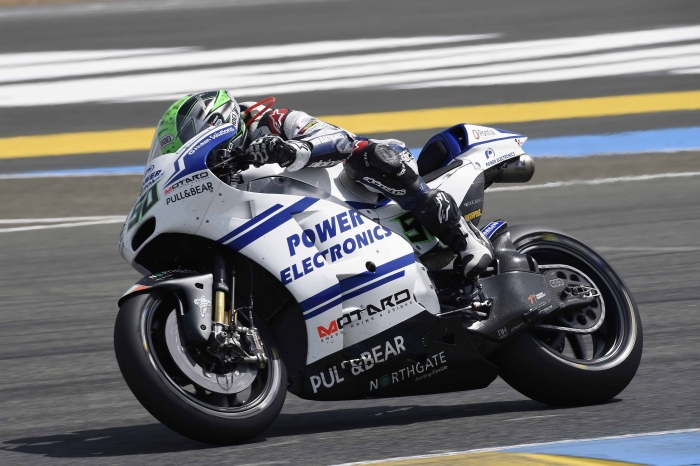 Jorge Lorenzo showed his intentions in the Grand Prix de France with the fastest ever lap of the Le Mans circuit by a MotoGP bike yesterday and today he backed it up with his second victory of the season, his first since the opening round in Qatar.

His rivals dropped away until only Valentino Rossi was left upright, Andrea Iannone the first to slide out of second place before Andrea Dovizioso and Marc Márquez both went down in the same corner. Maverick Viñales picked his way through the carnage to claim his first MotoGP podium in a race that saw just thirteen riders make the finish, with seven of the top nine coming from Spain.

Márquez picked himself up from his crash to claim thirteenth, with Tito Rabat the only other Spaniard outside that top nine.

Aspar Team rider Eugene Laverty continued with his points-scoring run, which now stretches to five races. The Irishman’s consistency has taken him to ninth in the championship, even after a race today that saw him suffer a technical problem in the early stages of the 28 laps.

Eugene produced a similar pace to Petrucci, who finished seventh, and has cited his qualifying performances as the key to better results in future.

11th Eugene Laverty:
“I made a decent start and I was up there with Petrucci and Barbera and then I started to feel there was something wrong with the bike. From that point it was just a case of bringing it home. My good fortune in a way was the misfortune of other riders because I was still able to come through and pick up five points. Looking to the future we need to improve our performance over one lap in qualifying, to be in that top ten or twelve. Our race pace today was the same as Petrucci but he made it into Q2 and that makes a big difference. It seems this year I’m a Sunday man but I need to be a Saturday man too.”