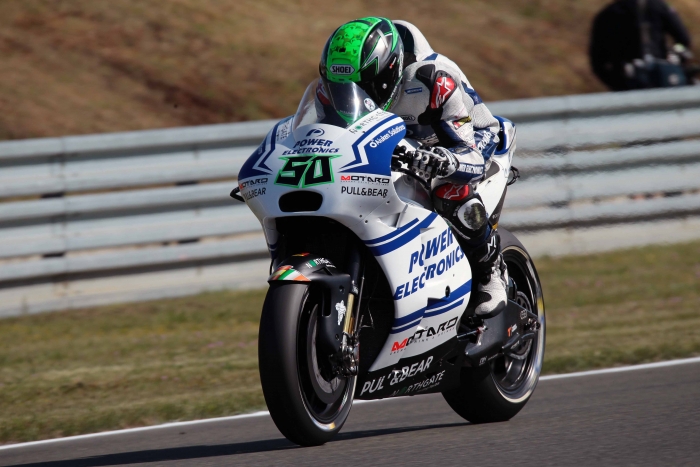 The historic Le Mans circuit welcomed the MotoGP World Championship with a pleasant surprise today as blue skies and sunshine prevailed for the majority of the day.

There were some surprises on the track too as Valentino Rossi, race winner last time out at Jerez, finished tenth fastest, with a gap of over three tenths separating the top two riders.

Jorge Lorenzo completed an impressive second session with a lap that took a full second off his best from the morning and left the overnight benchmark at 1,32.830, just five hundredths off the lap record held by his team-mate Rossi.

Andrea Iannone and Marc Márquez complete the top three ahead of Pol Espargaró, fourth fastest at the start of his team’s home Grand Prix.

Eugene Laverty was the fastest of the two Aspar Team riders after a busy day that saw him finish 1.6 seconds off the pace of Lorenzo.

Eugene struggled for grip in the morning session but along with his team he turned things around to find two seconds in the afternoon.

The Irishman has again set a target of qualification for Q2 this weekend, although his main focus is race set-up as he looks to continue a strong run of results.

16th Eugene Laverty 1.34.425 (30 laps):
“Our bike worked well at Jerez but this track has a completely different character and it didn’t feel good this morning. I didn’t have good feeling with the rear in corner entry, there was no grip on entry or exit and that meant I couldn’t turn the bike. In the afternoon we improved the lap time by two seconds, which is huge. I am really pleased with the way the guys turned it around so quickly – even my first lap in FP2 was already half a second faster than what I managed this morning. Once we got the rear gripping better, everything else fell into place. So we made big progress and now I feel optimistic. The aim for tomorrow is to fight for the Q2 although if it doesn’t happen it’s not a big problem – we saw in Jerez that I can make up some positions even on the first laps. The race is the most important thing so we’ll keep working hard on the set-up and hopefully keep improving like we did today.”