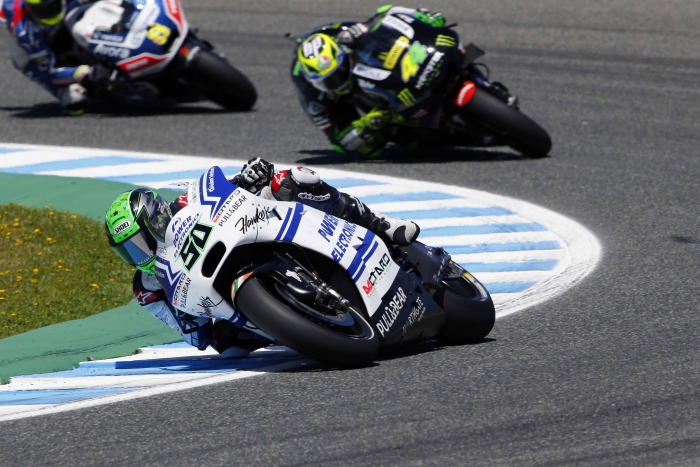 The Spanish Grand Prix concluded with a fairytale ending to a story written by Valentino Rossi, which he started with pole position yesterday and finished with his 113th career victory today.

The Italian rode on the limit for almost thirty laps of the Jerez Circuit, taking the MotoGP win with an advantage of over two seconds at the line. The two riders behind him on the front row of the grid joined him on the podium, Jorge Lorenzo and Marc Márquez maintaining their starting positions of second and third ahead of Dani Pedrosa, Aleix Espargaró and Maverick Viñales.

Eugene Laverty made a strong start to the race, slicing through the pack in the early stages to position himself comfortably in eighth. Despite starting from fifteenth on the grid the Irishman has been determined all weekend to score a top ten finish here and he achieved his goal with a strong ride.

Ninth place for Laverty at Jerez represents his second-best result in MotoGP, having crossed the line today as the second Ducati home.

9th – Eugene Laverty:
“My brother John said to me before the start that this race wouldn’t be like the other ones, there wouldn’t be so many crashes, so I would have to pull my finger out on the early laps and I did just that! The start made a big difference. Friday was the first time we’ve had a new clutch on this bike and it allowed me to make a fantastic start. This feels like a real result. In Argentina we were still finding out feet and we had a bit of luck, but this one we have worked so hard for. Even at the end I was starting to close on [Pol] Espargaró but the clutch was slipping for the last six or seven laps. Otherwise the bike was fantastic and this is a great result for us.”