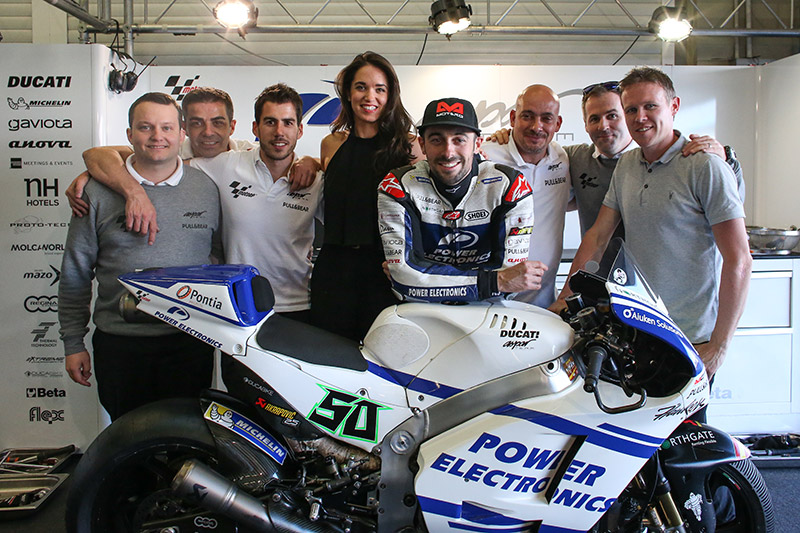 Aspar Ducati rider Eugene Laverty will race with the Northern Ireland Air Ambulance badges on his leathers at the Spanish MotoGP this weekend, continuing to show his support for the charity.

The campaign for the Air Ambulance was sparked last year by Dr John Hinds and Laverty has actively expressed his backing for the charity since then.

The Northern Irishman ran a tribute helmet to his friend at the German MotoGP round last season and will take it a step further this year in Jerez.

Eugene said: “We’re moving ever closer to having an air ambulance in Northern Ireland and the project has really gathered momentum this year. It’s important to keep it fresh in everyone’s mind in order to achieve Doctor John Hinds’ goal of bringing an air ambulance to Northern Ireland. We’re almost there now and to once again raise awareness I will race with the ‘Air Ambulance NI’ logo on my leather suit this weekend in Jerez. So many people are working hard back home to make this vision a reality and I’m proud to have the opportunity to help out.
Last year my sponsor Shoei was incredibly helpful in producing a replica of John Hinds’ helmet for me to use at the German Grand Prix. I’m very fortunate to have great sponsors in both Shoei and Alpinestars who have added the “Air Ambulance NI” logo to my race suits in preparation for the Spanish Grand Prix in Jerez this weekend.”

Ian Crowe, the chairman of the AANI, has expressed his gratitude to Laverty ahead of the weekend: “The Trustees of Air Ambulance Northern Ireland would like to thank Eugene Laverty for his recognition and support of the Charity. We particularly want to thank him for his kind offer to promote the Charity and the urgent need for an Air Ambulance in Northern Ireland.
Eugene is a highly successful and respected professional in Motorcycling Sport both nationally and internationally and we are very proud that he has chosen to be an advocate for the Charity. We would like to take this opportunity to thank the wider Motorcycling Sport Community for their support and encouragement of the Charity and to promote the need for an Air Ambulance in Northern Ireland.
We hope that through their and many others encouragement, support and goodwill that we can realise this important lifesaving service later this year.”

Local racer Eugene will be attending the NW200 as a spectator, where they are hoping to have the air ambulance up and running in time for the famous Irish road race, with event director Mervyn White saying that hopefully the race will also be an important opportunity to raise much-needed funds for the charity.

“Over the past two years, we’ve had a requirement to bring in an air ambulance from various places to the event, after having a couple of serious incidents.

“This year, we’re really hoping that we’ll have the ambulance on hand, so that if we do have a serious incident we can fly people straight to the hospitals in Belfast – something that we’ve been pushing for a number of years, because it’s crucial that we can get people there as quickly as possible.

“There are some fine details to be sorted yet with landing positions, but we’re hopeful that during the race itself it’ll be positioned around the start area so that we can raise some funds for them.

“We’re having a black tie event in the hospitality marquee on Saturday 7th May to raise funds for them, and we’re having a golf day on the 11th. We’re going all out to raise as much money as possible to put straight back into it.”