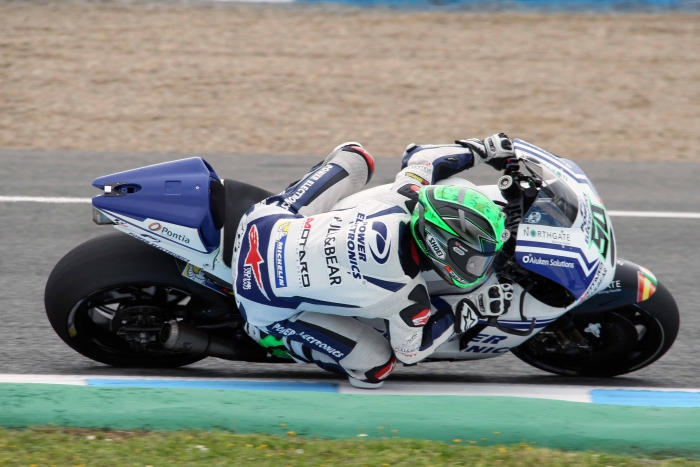 The Spanish Grand Prix will see the return of Valentino Rossi to pole position tomorrow for the first time since June 2015 and for the first time in eleven years at Jerez after a stunning final lap that took him to within a thousandth of a second of the pole record this afternoon.

The Italian looks certain to be fighting for the win tomorrow with Jorge Lorenzo and Marc Márquez, who start from alongside him on the front row in second and third place respectively.

The gap between the leading trio and the rest is noticeable, with Andrea Dovizioso qualifying fourth fastest some eight tenths off the pace set by Rossi, heading up a second row that also includes Maverick Viñales and Aleix Espargaró.

After spending the weekend consistently inside the top twelve positions during practice it proved to be a disappointing qualifying session for the Aspar Team’s two MotoGP riders.

After some extremely close lap times in Q1, Eugene Laverty and teammate Yonny Hernández qualified fifteenth and sixteenth respectively, meaning they will launch their challenge for points from the fifth and sixth rows of the grid.

Eugene nonetheless knows he has better pace than he was able to demonstrate in the fifteen-minute Q1 shootout and is confident he can have a good race tomorrow.

15th Eugene Laverty 1.40.292:
“I’m disappointed with the position because we had the potential for more but as is often the case in Q1 there are riders trying to follow each other, waiting all over the track. It messed up my session but that’s how it is. When I went out on my second tyre I tried to push my way through but there was so much traffic I couldn’t even keep enough heat in the tyre. Personally I need a fast out lap to keep the temperature up but by turn three of my second lap the left side of the tyre was basically cold and I almost crashed. We have found a good setting here and I have been knocking on the door of the top ten all weekend so to miss out on Q2 in this way is very frustrating. It was our best chance yet but anyway our race pace is good so that’s why we have to stay positive for tomorrow.”.