Solid start for Eugene at Jerez 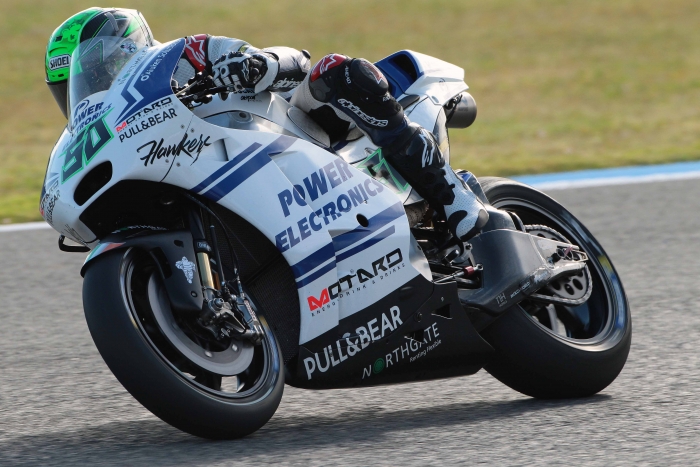 The Jerez Circuit officially welcomed the 2016 MotoGP World Championship to Europe today with the first free practice sessions of the Spanish Grand Prix, which were both dominated by Jorge Lorenzo.

Far from being distracted by the news that he will leave his team at the end of the season, Lorenzo clocked a best lap of 1’39.555 to hold off the challenge of a host of fellow home favourites, with six of the top eight riders today hailing from Spain.

Only Italian pair Valentino Rossi and Andrea Dovizioso were able to break up the hegemony of Marc Márquez, Aleix Espargaró, Héctor Barberá, Maverick Viñales and Dani Pedrosa, who was the only rider unable to improve his lap time in the second session of one of the best days of the season so far for Spanish motorcycling.

It was an equally satisfactory day for the Spanish Aspar Team, with both its riders in the top twelve and Eugene Laverty on course to qualify directly for Q2.

Eugene made a more cautious start to the weekend than his team-mate Yonny Hernandez, lapping seventeenth fastest this morning as the Colombian went eighth, but the Irishman put his Superbike experience to good use this afternoon, stepping up his pace at the circuit where he celebrated a double win back in 2013.

10th Eugene Laverty 1.40.925 (28 laps):
“This is where we need to be. The aim this weekend was to qualify directly for Q2 and we are on course. It is still going to be a fight tomorrow morning but we’ll put a tyre in at the end and try to get in there. But for today, not bad. Over the past couple of rounds we have improved our base setting and I was confident coming here that we would be starting out on the right foot. Looking at what another Ducatis have done today, we can see what our bike is capable of here and we are working towards it.”