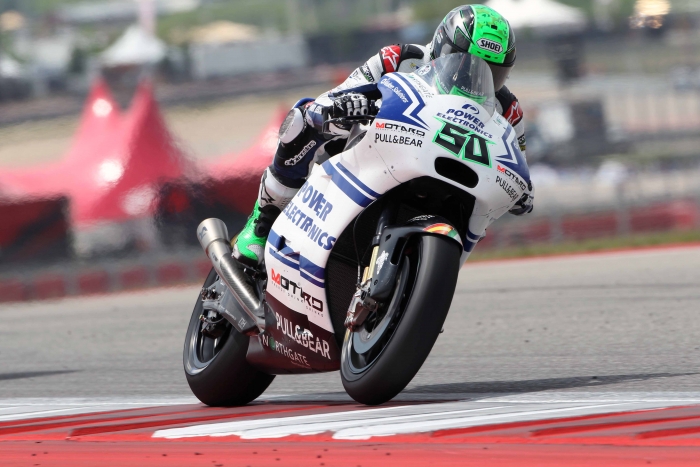 Marc Márquez continued his domination of the Grand Prix of the Americas today with his fourth victory from four visits to the Texan track for MotoGP.

The Spaniard took a clear win today by seven seconds from Jorge Lorenzo, who was unable to apply any real pressure at the front as Valentino Rossi, Dani Pedrosa and Andrea Dovizioso all crashed out. Andrea Iannone made it three different manufacturers on the podium in third place, with Suzuki team-mates Maverick Viñales and Aleix Espargaró completing the top five.

Márquez now leads the championship by twenty-one points from Lorenzo, with Rossi now over thirty points adrift in third.

For the first time this season the Aspar Team had both riders finish in the points, with Eugene Laverty taking twelfth place ahead of teammate Yonny Hernández in fourteenth.

Eugene picked up a hard-earned twelfth place and four more valuable points to take his tally for the season to twenty-one.

12th Eugene Laverty:
“It was a difficult race, which I expected because I didn’t have a fantastic feeling all weekend. I made a decent lap in qualifying to get fifteenth on the grid but I knew it would be harder in the race. The important thing on days like this when other riders crash is to finish the race and pick up some points, which is what we did. The rear tyre felt good for the whole race but the front I didn’t have a good feeling for on the right side, and that was why I crashed on Friday. Today I felt like I could crash every time on the right side of the front tyre so I was a little bit scared for that.”