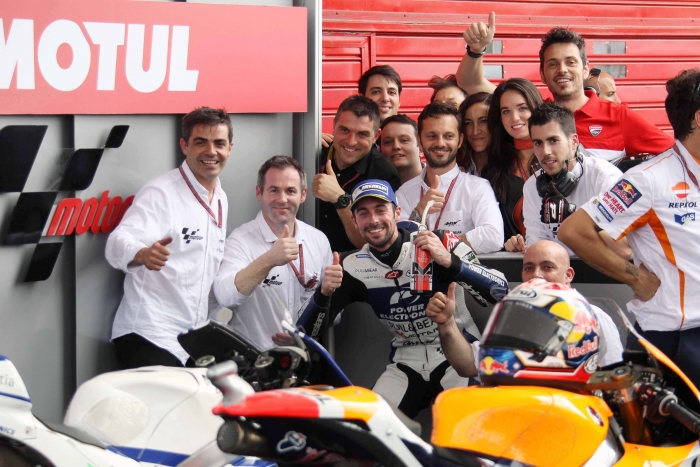 The usual uncertainty and anticipation ahead of a MotoGP race was exacerbated in Argentina by the presence of rain this morning and problems with tyres, which made for a shortened race that would feature an obligatory bike change between the ninth and eleventh laps.

The recent dominance of Marc Márquez on Argentinean soil was threatened only by Valentino Rossi, and even then only for the first half of the race, when the switch of machinery proved to be the Spaniard’s chance to escape.

From that point on the Italian was left to fight for the podium with Viñales, Iannone and Dovizioso until a crash from the Spaniard and then a collision between the two Italian team-mates in the final corner left Rossi clear to take second ahead of a distant Pedrosa in third.

Close behind in fourth place came Aspar Team rider Eugene Laverty, who produced by far his best performance as a MotoGP rider in the second race of his second season.

An incident between Héctor Barberá and Pol Espargaró on the final lap gave the Irishman the opportunity to snatch a welcome fourth place as he crossed the line not only as the top independent rider but also the top Ducati.

Eugene started the race from seventeenth on the grid but gradually made his way up to thirteenth before taking the first opportunity to switch bikes. After that he continued his charge at one of his favourite circuits, clinching a deserved fourth place at the flag.

4th Eugene Laverty:
“That last lap was something a bit special! I think I started it in eighth position and finished it in fourth, it was an incredible race, a race of two parts because we obviously had to come in to change bikes. The track was a little better on the second exit but I realised that I had to make up all my time in corner entry because I had no rear grip compared to the other riders, so I pushed the front tyre and was able to keep a good rhythm. After the preseason we had, I can’t ask for more than thirteen points in the second race of the season. Last year I managed nine points over the whole championship so to get thirteen in one race is great recompense for myself and for the team, who kept faith in me and let me work my way back in testing. We were off the pace after so many big knocks and it took me a while to regain my confidence but I feel we are back where we should be now and I want to thank the whole team for their efforts.”