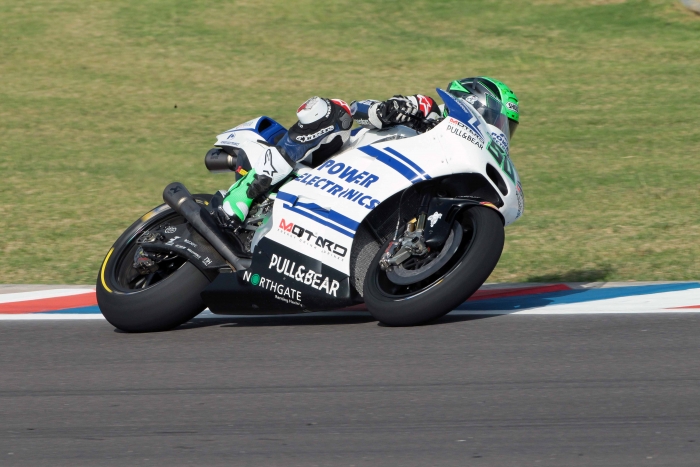 Termas de Río Hondo welcomed MotoGP back to Argentina today although the track conditions were not as good as they have been in past seasons here, which was evident on the timing screens.

The fastest riders on track today were Marc Márquez and Dani Pedrosa, who had a close battle that was decided by a few thousandths of a second. The Spanish pair led a late charge for lap times as the riders tried to potentially put themselves directly into Q2, with local weather forecasts predicting rain for tomorrow’s final free practices.

The top ten were separated by a little over a second today, making for an interesting day of practice and qualifying to come tomorrow.

ASPAR Team rider Eugene Laverty was less than a tenth of a second off that elusive top ten, which would have given him a pass into Q2 should FP3 be washed out tomorrow. The Irishman reported minimal front grip levels today, which caused him to suffer a small crash, although he escaped unhurt.

12th Eugene Laverty 1.42.724 (29 laps):
“Both practices were good in the end, with good lap times. The conditions are really slippery so it is going to be interesting to see if it improves tomorrow but at the moment we are in a good position. The biggest problem I think everybody is having is with the front tyre. It is so slippery and I had a front-end crash in FP2 so that was a tough lesson. With the rain forecast tomorrow I was pushing hard at the end of the session to try and make Q2 and in the end I missed it by 0.09 seconds so I am very close and we’ll just have to try again in the morning if it’s dry.”