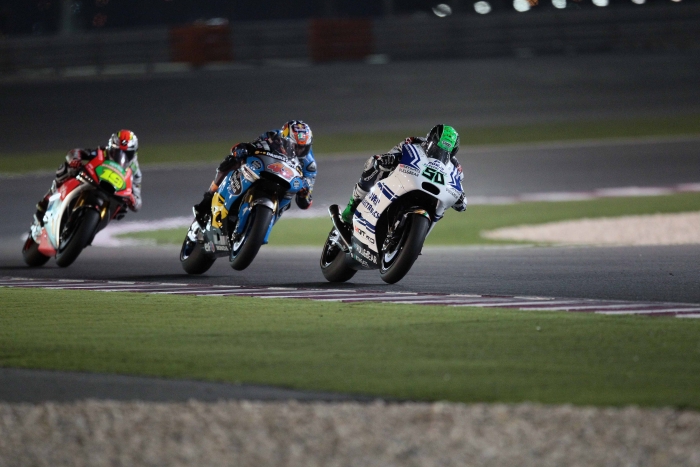 At 9pm local time the MotoGP World Championship finally fired up in Qatar with the first race of the season under the floodlights of the Losail International Circuit.

The early running was made by Andrea Iannone but after he slid off on the fifth lap it was left to his team-mate Andrea Dovizioso to do battle with Jorge Lorenzo, Marc Márquez and Valentino Rossi.

Lorenzo took control on the ninth lap and never looked back as he eventually opened up a narrow but crucial gap over the rest, making his escape on lap sixteen and converting a 0.4 second lead to two seconds by the chequered flag, clocking the fastest lap of the race two laps from the end.

Behind him the battle raged for the podium, with Dovizioso holding off a late lunge from Márquez for second as Rossi missed out.

In difficult conditions only fifteen riders actually managed to finish the race, including the excellent Eugene Laverty.

The Irishman received a new engine on Thursday and after spending a couple of days adjusting the settings he and his crew made a breakthrough last night that gave him confidence going into the race.

After establishing a strong and consistent pace in warm-up the ASPAR rider overcame some early race issues to battle with Bautista and Miller for a hard-fought twelfth place.

12th Eugene Laverty:
“We made big progress here compared to preseason, suddenly on Saturday we had a big breakthrough and today we achieved a positive result. I had a problem at the start with a bit of wheelspin off the line because I was on a dirty part of the track and then on lap one Loris Baz ran me wide off the track. So it was a disastrous start but after that we managed to come back well. I had a good fight with Miller and Bautista and I think we can be happy to start the season with a twelfth place. The next race is Argentina, I rode there for the first time last season and already it became one of my favourite tracks. It really suits my riding style so I am happy to be leaving here with some confidence in the bag, the team is working fantastic and I think we can go to Argentina now to fight for the top ten.”