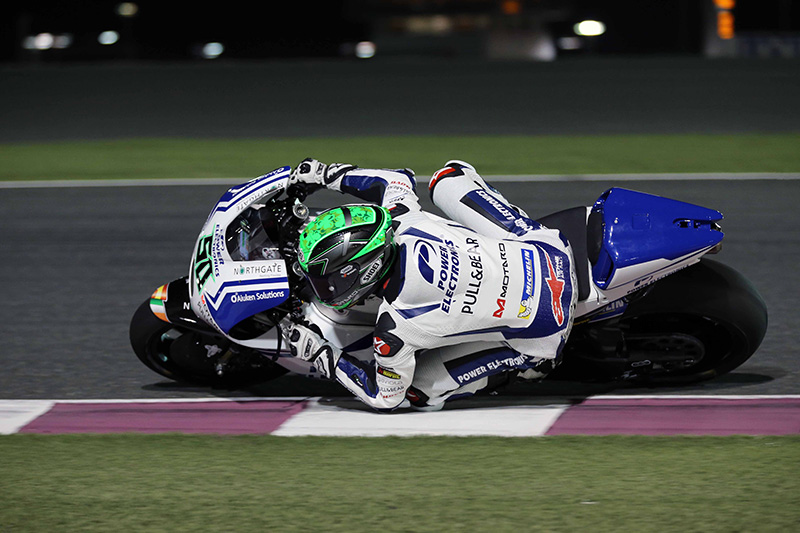 Today saw the first qualifying sessions of the 2016 MotoGP season, to decide the grid for the Qatar Grand Prix.

Pole position for the season opener went to Jorge Lorenzo, who set the fastest time of the weekend with a 1.54.543 lap.

He was challenged by Marc Márquez, who placed 0.091s off the top spot, and an all-Spanish front row was completed by Maverick Viñales –who pushed hard on his final lap to also close in on Lorenzo. Just under a tenth of a second separated the front three at the Losail International Circuit.

The ASPAR riders were very active today in the first qualifying session of the season. Both pushed hard to try to sneak into Q2 -something that they finally could not manage- but both Eugene Laverty and teammate Yonny Hernandezput in a great performance.

Eugene, who had spent much of the practice time adapting to a new engine, took a big step forward to set his best time of the weekend on the final lap of the qualifying session.

A gearing issue was the only thing denying him an even faster lap of the Losail International Circuit.

14th Eugene Laverty 1.56.186:
“We worked in a good way today. Yesterday we had problems, basically losing an entire practice session. I got comfortable with the new bike and the new tyres in qualifying, so I pushed more. We made another small change in the same direction for the second tyre, and I set a fantastic lap with that. I got a 1:55.8 for my last lap, but I’d shifted to sixth gear before the finish line and lost a bit of pace when it didn’t work. That dropped my time down to 1:56.1. I was really angry, because I lost about 3 tenths because of that. I’d done everything perfectly on the final two corners, but it came undone when the gear didn’t engage. The crew will check what the problem was, but it dropped us down one place on the grid. However, the important thing is that we took a huge step forward. We were behind before, but now we are catching up just in time. I tested out the bike on a medium duration run in FP4, and the bike does change a lot –especially with the rear tyre- so we will have to make a plan for the race with the electronics to give me some options.”