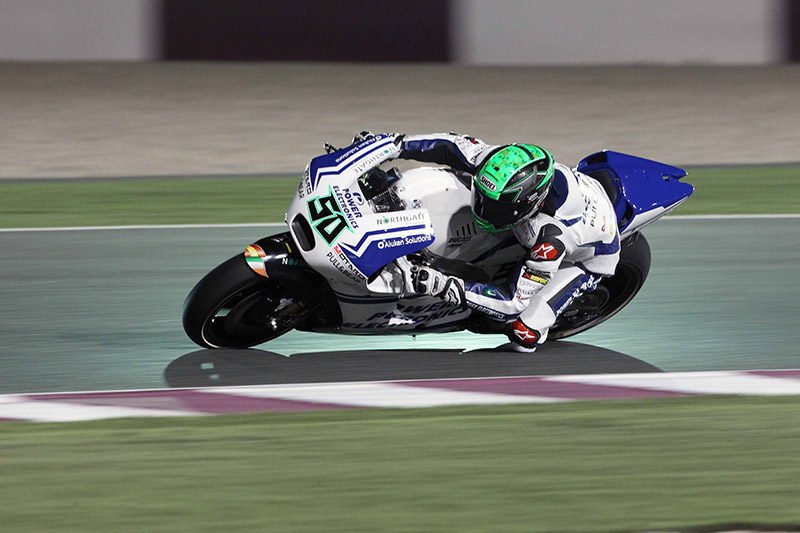 Friday at the Losail International Circuit saw the second night of MotoGP action in the desert, and in the second session there was a taste of what may be to come in qualifying tomorrow.

The riders left it until the final ten minutes of the session to make a push for the top of the timesheets, Iannone, Lorenzo, Marquez, Dovizioso and Viñales finally broke the 1’55 mark, and they concluded the night separated by just over three tenths of a second. In addition, less than a second separated the top twelve finishers.

The grid for raceday will be decided on Saturday, in the first qualifying session of 2016, and it appears that things will be equally as tight.

Today the Aspar Team riders were able to see the power of their bikes, as the seven fastest bikes on the top speed chart were all Ducatis.

Eugene Laverty had difficulty with defective tyres, in addition to issues with the electronics on his Ducati. Despite having one of the fastest bikes on the grid (sixth on the top speed charts), he still did not feel comfortable riding and ended the day rounding off the timesheets. The Northern Irishman hopes for improvement in tomorrow’s action at the Losail International Circuit, in preparation for Sunday’s race.

Eugene Laverty 21st 1.57.135 (30 laps):
“We had some incidents in the sessions today. The first was a mechanical problem, then we had an electronics issue with the second bike when we went out on that. We fixed that, then had a faulty front tyre to deal with afterwards. It was one of those nights; I maybe should have stayed in bed for a few more hours! I’d been suffering problems in winter testing when trying to make the bike turn in, which had lowered my confidence a little, and now I know why the bike wasn’t responding how I wanted; Yesterday was almost like the start of preseason again, but there is reason for optimism because now I understand what I was lacking. With the different engine we’ve had to go back to the drawing board. I feel as if we are still testing, we’re struggling; obviously I’m a rider and I want to push all the time, but we decided to keep a fresh tyre for tomorrow in FP4 and see how the bike is for a longer run.”