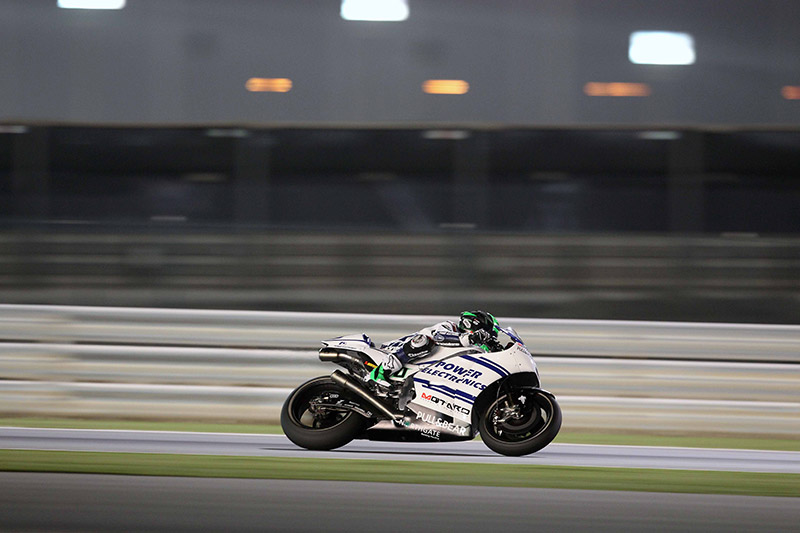 The first 45 minutes of the MotoGP season took place tonight as the opening free practice session for the Grand Prix of Qatar signalled the start of 2016. Jorge Lorenzo continued his dominant form from preseason testing, spending virtually the whole session at the top of the time sheets and finishing with a benchmark of 1’55.440.

Intense wind and some rainfall over the past couple of days meant that the track was not in as good condition as the recent test, making for lap times that were around seven tenths slower.

Lorenzo’s advantage stands at three tenths over his team-mate Valentino Rossi and Ducati factory rider Andrea Iannone. It has been a competitive start to the new season throughout the grid, with just over 2.5 seconds separating first to last place around a circuit measuring over five kilometres.

Eugene Laverty and Aspar teammate Yonny Hernandez were glad to get back on track in Qatar after some important preseason testing work here almost two weeks ago.

The ASPAR Team riders were able to take advantage of the information gathered during that test to establish a base setting for their bikes, clocking up 14 laps apiece in the limited time available tonight.

Eugene clocked his fastest time on his eleventh lap as he closed in already on his best effort from the test.

19th Eugene Laverty 1.57.421 (14 laps):
“It was a really positive first night of the season for us. We have started the first Grand Prix with a new engine, which is the first time I am riding with the same engine as the other riders on the Desmosedici 14.2 and now I understand the problems I have had up to now – it changes so much on the bike. It is braking better and turning better, which are the areas I was struggling with, so now we have reason for optimism and we understand how we can move forward. Even with the rain yesterday the grip wasn’t so bad tonight. It is hard to get up to speed in just one session but the lap time was similar to the test on an old tyre so that’s good. We have some work to do because the change in characteristics of the engine means we have to alter lots of other parameters with the bike, so this will be our main focus tomorrow night.”