Eugene tells Crash.net “I fell in love with my bike again” 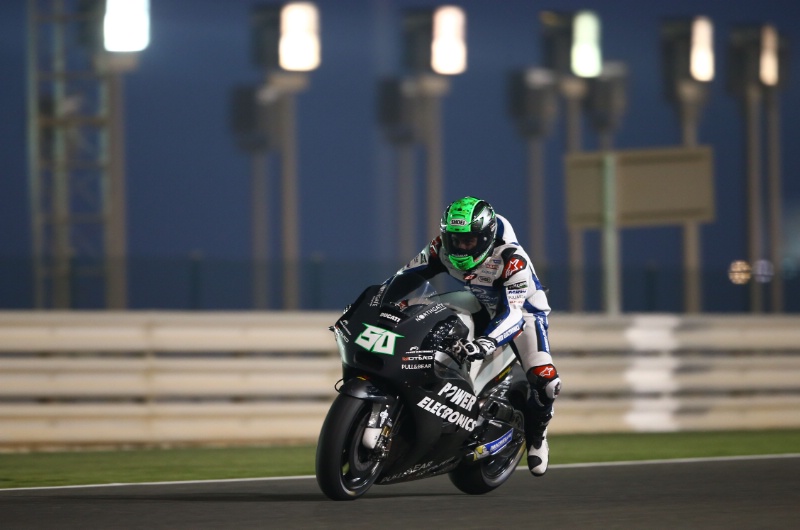 In a great article on Crash.net Eugene told all about the recent testing sessions and how he’s regaining confidence in the rideability of his bike ahead of the Qatar season opener…

After a difficult off-season, Eugene Laverty has rediscovered the joys of riding in Qatar, a change with the front fork setting drastically improving his feeling with the tyres.

Eugene Laverty has said it was a ‘big relief’ to rediscover his love for riding again, as a change late into Friday evening with the front fork allowed him to feel comfortable and gain confidence with Michelin’s front tyre.

The Northern Irishman placed 20th in the combined timesheets after struggling to make the front tyre to work in the first two nights. As he sought to combat a ‘slipping’ and ‘jumping’ sensation, the late changes allowed Laverty to brake late while applying ‘almost as much’ pressure as he did with Bridgestone rubber.

This new improved feeling , more than the lap time, was reason for optimism. “It’s a big relief to fall in love with your bike again,” began the 29-year old. “Not enjoying riding, that’s never happened. On the last day I felt really content and we were pushing on. OK, the new tyre, I really tried for a lap time and all I could was 1m 57.1s. That was the limit. I was thinking, ‘S**t, where’s the 56 at here, never mind the 55?’

“After that we worked on the setting and I began to understand. I realised where we need to improve because we improved the front feeling a lot. That was part of the reason why I’ve had so many bloody crashes. Then I’ve stopped the front tyre slipping so much, I’ve stopped in jumping. It’s amazing how you get used to a sensation like that, when the tyre is slipping and moving. All of a sudden we fixed it and we thought, ‘This is a tyre again.’ It feels nice.

Laverty recognised the need to spend as much time on the bike as possible, as bad luck and falls limited his track time in tests in Jerez, Sepang and Phillip Island.

Speaking of the change that brought back his feeling, he continued, “It was a big change inside the fork. It’s a different tyre to what I was used to last year and in years previous.

“Every rider is different in their braking technique and their size as well. For Yonny it wasn’t so bad and he wasn’t having the same problems I was. But he’s a lot heavier and had a lot more weight transfer. We were able to make that change and the tyre was responding. It was no longer sticking on the tarmac.”

“At the end it was really working well. The braking point was late. I was squeezing the brake almost as much as last year and the thing was responding. I’m optimistic for that.”

As the speed of both Avintia Ducatis and new Aspar Ducati team-mate Yonny Hernandez underlined the GP14.2’s speed at the Losail Internation Circuit, Laverty plans to continue progressing through the first round in order to place alongside the other three men on his spec of bike.

“That would be the wise thing to do but as a race you want to keep progressing. In Argentina I want to be on the pace by then because it’s a really strong track for me. [I want to] Keep building like we did at this test. I’m not happy with where we were off the front. I want to catch up on the other 14.2s.”