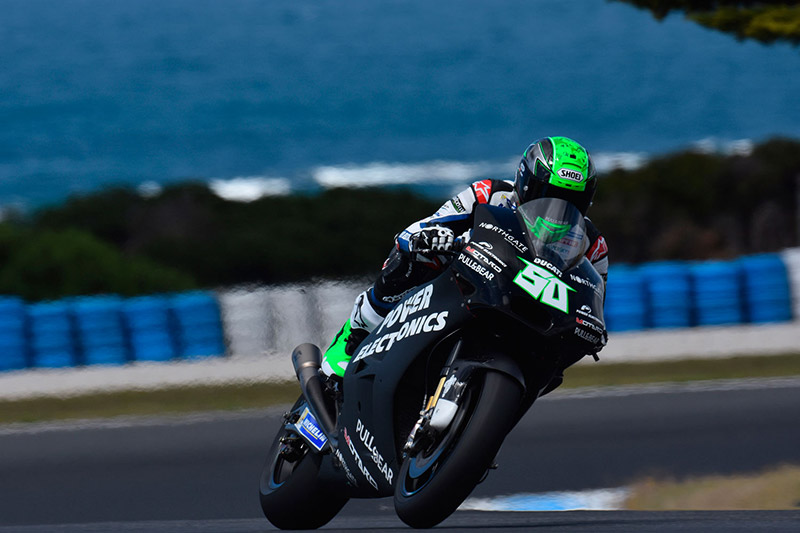 After an unproductive first day at Phillip Island, the MotoGP field was today able to lap in much better track conditions, although the morning was lost again to several early showers.

The quickest laps of the day swapped between the likes of Márquez, Lorenzo and Viñales, with the young Suzuki rider ending day two fastest down under. Parity was in evidence however, with just three-tenths separating the top four, and just 1.5 seconds between the whole regular MotoGP field.

Once the two Aspar Team riders had waited for the track to dry, they both still completed well over 50 laps, with both Eugene Laverty and teammate Yonny Hernandez improving their feeling today on board their Ducatis.

Eugene was cautious at first, but as the hours went by the Irishman made significant progress, improving his confidence in the front end of his bike as well as his overall pace. By close of play, he was under one and a half seconds behind the day’s fastest lap (1.29.131).

18th Eugene Laverty 1.30.617 (52 laps):
“Today was good. The beginning of the day was wet so we had to wait a little bit but once it dried out I was able to make fifty laps, so we were able to adjust the bike and make it a little bit more comfortable for me. First of all the most important thing for me was to get some confidence with the front because that is what caused my crash in November. At the start it didn’t feel so good and I felt I was going to crash again but we made some progress and as my feeling with the front improved so did the pace. The lap time is coming but we have a lot more potential than this so we have a lot of work to do.”