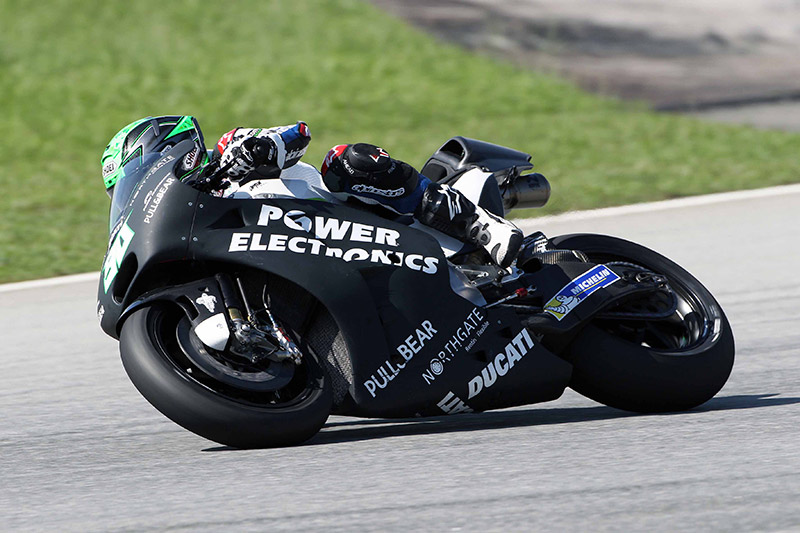 The first MotoGP preseason test of 2016 got underway at the Sepang circuit in Malaysia today, where the teams and riders completed their first laps of a crucial build-up to the opening round of the season on 20th March in Qatar.

There are two major new factors in MotoGP this year, with a new single tyre provider (Michelin) and standard electronics for all riders, meaning plenty of hard work was taking place up and down pit-lane and out on track today. Defending World Champion Jorge Lorenzo set the pace on the opening day, the Spaniard clearly adapting quickly to the new material as he left the rest of the field trailing by over a second with an impressive lap time of 2’00.684.

Eugene Laverty was denied the opportunity to get fully to grips with his new Ducati, however, the Irishman’s day coming to a premature end on his 27th lap, when a mechanical problem caused him to crash in turn four. Initial medical examination indicated a possible fracture in his hand, which was thankfully ruled out following an X-ray.

19th Eugene Laverty 2.03.565 (27 laps):
“We’ve been for the X-ray and thankfully there is no fracture, just some tissue and ligament damage, which is a relief. It’s just unbelievable that after spending the last couple of months recovering from a broken wrist we have this on the first day of the first test! It seems we had a mechanical problem and I had to jump off the bike under braking into turn four. It was a scary moment but quite lucky really because it could have been much worse. The bike went straight into the tyre wall at well over 100km/h so that wasn’t nice to see – I never like to see a bike destroyed! Overall it wasn’t a great day because we spent the morning with some electronic problems, the throttle stuck open and I was lucky not to crash on that occasion too. It meant the guys had to check things over and we lost some track time. Now I have to wait and see how the hand is tomorrow. Obviously I want to get back out there as soon as possible but we’ll have to wait and see when that is.”