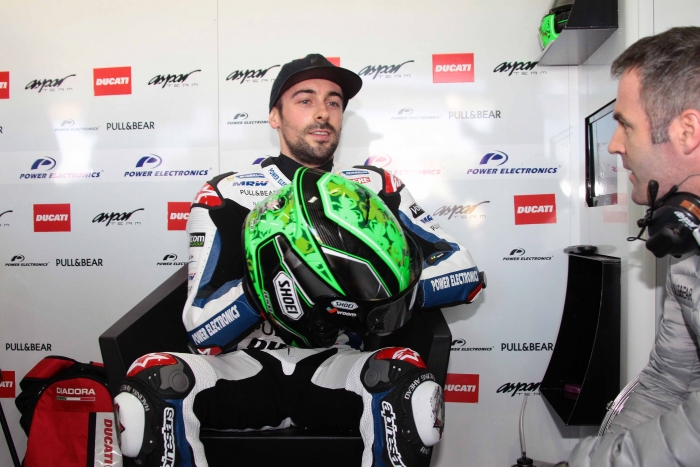 MotoGP and Superbike riders shared the track at Jerez again today as the final test of 2015 continued in the Spanish sunshine.

The track surface took a little time to warm up, but the riders were soon able to start working on their new standard electronics packages for 2016, as well as the new Michelin tyres.

A crash for Michele Pirro saw the red flag produced at around 4pm but once the Italian rider was out of danger the action was able to resume until the track closed at 6pm.

Unfortunately Pirro’s crash was not the last of the day. Around an hour later POWER ELECTRONICS Aspar rider Eugene Laverty lost the front in turn seven, injuring his left wrist. X-rays at a local hospital confirmed a break to his left radius, just by his wrist.

Further examination also revealed a dislocated shoulder and blow to the head. This evening Eugene will be admitted to a hospital in Jerez for a CAT scan to check for any further injuries, before tomorrow flying from Seville to Barcelona and the Hospital Universitario Quirón Dexeus, where Dr. Xavier Mir and his medical team will conduct surgery to relocate and fix his broken and displaced radius.

Eugene Laverty:
“It’s a disappointing end to a good day of testing. We made good progress with the new electronics and the last exit before I crashed was probably the first time we had the bike working correctly. The lap times were getting better and then I crashed, so I’m disappointed. It would always be nice to do another day but the positive thing is that the bike is working well, we are not too far away from the others and Yonny can continue to test tomorrow. Also the Ducati guys are making a big effort so the aim right now is to recover and return in Sepang in a good way.”