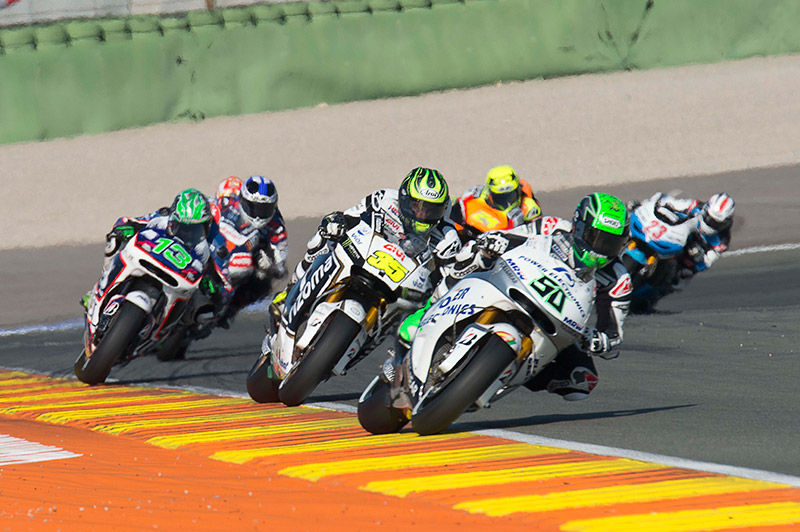 It’s over. One of the most exciting seasons in recent memory concluded today with a race that went very much to form, as Jorge Lorenzo wrapped up the win and the world title from pole position.

The Spaniard has shown the pace all weekend here and he backed up his practice potential by dominating all thirty laps from the front, clocking a new lap record as he held off the challenge of Márquez and Pedrosa.

Behind the top three Valentino Rossi put up a valiant display from the back of the grid to finish in a highly-creditable fourth place, but it wasn’t enough to retain top spot in the championship as Lorenzo picked up his fifth title in all classes.

Eugene Laverty’s season came to a premature end, the Irishman still struggling with a burn suffered in the last race at Sepang and forced to retire on the 23rd lap.

Eugene Laverty (DNF):
“I made a good start, probably my best of the year, and tucked in behind Rossi for the first three corners. Everybody made a gap for him so I followed him through and was able to gain some places. The bike was working well for the first half of the race but after that I started to have problems with my foot burning again. It wouldn’t have been so bad if it wasn’t already raw from Malaysia but once the footrest got up to sixty degrees I knew I was in trouble. I tried to stick it out but I had to come in. My motto is “ride her ’till she blows!” and I have never had to stop for anything like this before so it was hard to take but we have a test to think about on Tuesday and if I didn’t stop I might have not been able to ride on Tuesday. After Malaysia I was on crutches for a week so I had to be smart about it. Overall it has been a strange year. We have had some good moments but to score nine points this year is much less than I feel we deserved. It was good to have a team-mate of the quality of Nicky because we could measure our work and we did a good job, but we didn’t have a package that was capable of consistent points-scoring finishes. When we did have the opportunity to show our pace we were strong but we were never going to be fighting for the top ten, that’s the long and short of it. I am looking forward to a new challenge with a new bike next season. I have a great team behind me that has won many World Championships and we now have the experience of a full season together in MotoGP so I am optimistic about next season.”