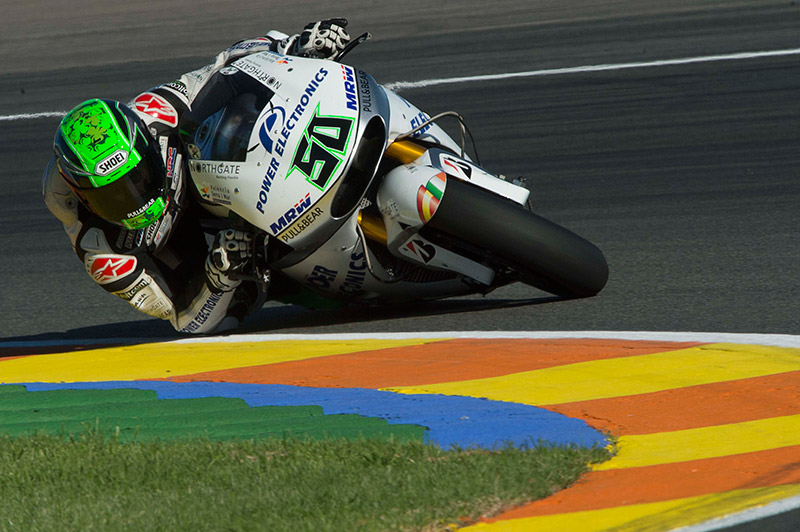 Today saw the starting grid for the final race of the season decided in Valencia. Pole position went to Jorge Lorenzo, one of the World Championship contenders in the Spanish showdown, with Marc Márquez and Dani Pedrosa accompanying him on the front row.

The other title contender, Valentino Rossi, will start the race from the back of the grid as a result of a penalty. Andrea Iannone and Márquez set the fastest times in the last two practice sessions for the Valencian round, but in qualifying Lorenzo set what he described as the best lap of his life: A 1:30.011.

Nobody could better the Yamaha rider’s time, and he will start from pole for what should be a spectacular race.

POWER ELECTRONICS Aspar rider Eugene Laverty had a difficult start to qualifying, crashing at Turn 4 and having his plans thrown out of the window as a result.

23rd – Eugene Laverty – 1.33.066:
“I crashed on my first qualifying lap and that really set the tone for the session in a way. Every time I went for a flying lap, the right side of the tyre was cold and spinning. The crash just destroyed the session for us, as I had to get the scooter back to the pits and there wasn’t much time. Yesterday was bad, this morning we made a lot of progress and then qualifying was a disaster with the crash. The track is tough for us and we’ve had a difficult weekend so far; the rear grip wasn’t good yesterday, and you can see marks on the track from where we’ve been slipping and sliding into the corners. It’s been tough. I would have liked a much better weekend so far, but we’ll do what we can tomorrow because we’ve still got this race to contest before the season comes to an end.”