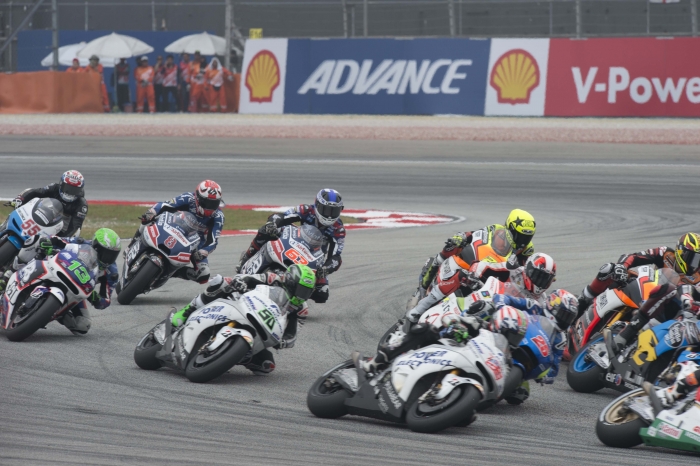 The Malaysian Grand Prix had been simmering since Thursday and today it hit boiling point in a moment of controversy that will dominate sporting headlines around the world tonight.

Pedrosa, Márquez and Rossi started from the front row at Sepang, poleman Pedrosa getting the perfect start to leaving feuding trio Rossi, Lorenzo and Márquez in his wake.

Lorenzo made an early pass on Rossi at the start of the second lap before going on to clock a new record of 2’00.606 and then passing Márquez for second place.

With Rossi and Márquez now locked together in an intense battle for third, the pair came close to making contact on several occasions before a clash on the seventh lap saw the Spaniard crash out.

With Pedrosa and Lorenzo clear at the front, Rossi rode home to a lonely third but he was later hit by a penalty from Race Direction that will see him start from the back of the grid in a final-round title decider at Valencia.

Eugene Laverty, who had shown good form in the hotter afternoon conditions of free practice, did not have the same feeling in the race today and he struggled to make an impact, crossing the line in nineteenth position.

19th Eugene Laverty:
“To be honest I thought I could be racing in the 2’03s today but there was no grip, we were on ice out there. I could see Nicky and Jack ahead of me and the gap to them stayed consistent but I’d lost so much in the early laps I couldn’t get back to them. I am disappointed. So far this weekend in the cooler conditions in the morning the other guys have been fast, and then in the afternoon heat I have been faster. Unfortunately the track conditions today were completely different to the past two days and I didn’t have the same feeling at all.”