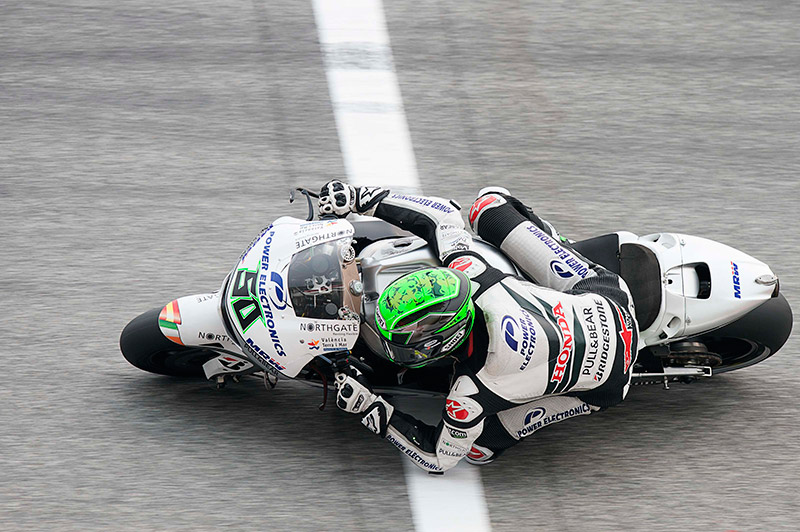 The start of this afternoon’s MotoGP qualifying practice looked more like Moto3, with a whole bunch of riders heading out onto the track together looking to benefit from a tow.

A weekend that started with a controversial press conference and some strong words between Rossi, Márquez and Lorenzo has seen the battle continue on track although none of the trio were able to take pole position today.

That honour went to the quiet man Dani Pedrosa, who edged closer to the 1’58s here with an incredible lap of 1’59.053 – the fastest ever by a motorcycle at Sepang. Márquez was closest to him, six tenths adrift in second place, with Rossi completing the front row.

Once again it wasn’t the qualifying session that the POWER ELECTRONICS Aspar team had hoped for. After a positive weekend so far neither Eugene Laverty nor teammate Nicky Hayden were able to produce a perfect lap to move them higher up the grid than 22nd and 19th respectively.

However, Eugene is confident with the pace he has shown throughout practice here at the Malaysian GP and is hoping that it can serve him well in tomorrow’s penultimate race of the season.

22nd Eugene Laverty 2.02.460:
“I didn’t seem to have the grip in qualifying that the other guys had over one lap but in terms of our pace in race set-up we seem to be quite strong. So I am positive for the race but I don’t want to be starting from 22nd on the grid. When it is hot and the other riders have less grip, my grip stays the same. In the cooler conditions we have a disadvantage but when it is hot my pace is strong so that’s also good for the race. At Phillip Island we started the race with too much tyre pressure and after three laps my race was over, so tomorrow it is critical to make sure everything is right so that I can maintain my rhythm to the end. We’ve also learned something here about the balance of the bike with a full tank and an empty tank so we have some small changes planned in that respect too.”