Eugene sets to work at Sepang 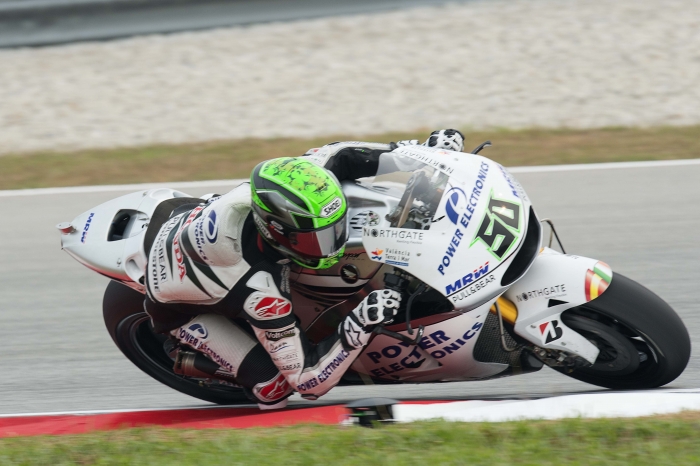 The heat has been rising at Sepang both on and off the track over the past couple of days, with yesterday’s controversial press conference being followed by an intense first day of action today.

After claims and counter claims of favouritism between Valentino Rossi, Marc Marquez and Jorge Lorenzo, it was time for the riders to do their talking on track in the opening two free practice sessions of the 25th edition of the Malaysian Grand Prix.

In-form Dani Pedrosa led the morning session and looked on course to stay on top this afternoon until a stunning late effort from Lorenzo sealed first position overnight.

Eugene Laverty struggled for front end stability this morning in the hard braking zones and bumpy sections that are a feature of this circuit, but he made strong progress this afternoon to finish as the leading Honda Open bike, two seconds off Lorenzo in sixteenth place.

16th Eugene Laverty 2.02.426 (33 laps):
“This morning we had a big problem in the braking area and also on the bumps, I didn’t feel safe with the front. We improved both areas this afternoon. For me it is nice to come back to somewhere we tested in preseason and see the progress we have made. I think everybody knows we didn’t have much support in preseason but the team have worked so hard to get us to where we are now. We were so lost at the test here, I didn’t even feel like I was racing the bike until Argentina. Now it goes where I want it to and I think that shows the quality of this team. The conditions are much hotter now and even after short runs this afternoon I was short of breath. I remember doing a full race run in the test no problem but today my throat was tight. I had asthma as a kid so I am hoping it is not related. I’ll speak to the other riders and see how they are feeling but anyway it is going to be a physically demanding weekend for sure.”