Nineteenth at Phillip Island for Eugene 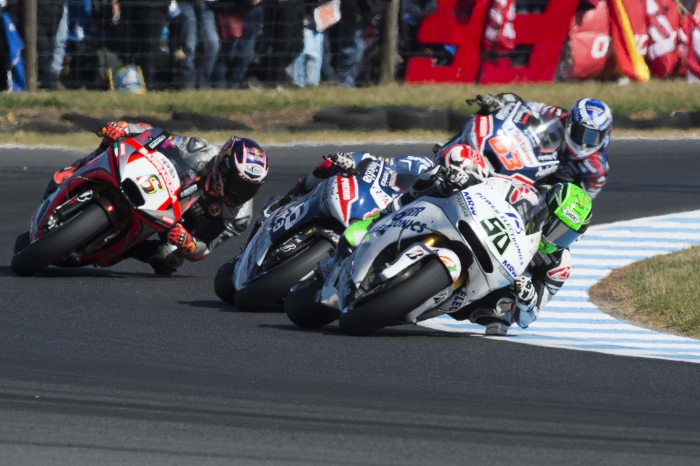 Today’s race at Phillip Island was the most exciting MotoGP contest of the season so far. Four riders battled for the victory, as Marc Marquez, Jorge Lorenzo, Valentino Rossi and Andrea Iannone all showed their skills in the Australian GP.

Lorenzo initially duelled with Iannone, before pulling away by a second. However, his getaway was neutralised by Marquez, who brought Rossi and Iannone along with him.

The two Italians dropped off and then caught Marquez back up again, and after trading passes with them the reigning World Champion made his final push to hunt down Lorenzo. He caught the Yamaha rider before the end, setting the fastest lap of the race to take the victory.

The POWER ELECTRONICS Aspar riders were unlucky today, as both had completed solid work on their setups. Eugene Laverty started from sixteenth position on the grid, whilst Nicky Hayden did so from twentieth.

Yet both started strongly when the red lights went out at Phillip Island, determined to fight back and get into the points. Laverty had three successful laps, but from Lap 4 he began to suffer from a lack of grip and was only able to bring the bike home in nineteenth.

19º Eugene Laverty:
“The first three laps were ok. I really thought on the opening laps I could do something, because I was being held up by the guys around me. I made a mistake at Turn 2, going around Héctor Barberá; he was going wide, so I go hung out to dry. I lost some places, but started to regain some and the bike was working really well. I was looking ahead to the likes of Scott Redding and trying to go after them, but it didn’t work out that way. We started with a higher tyre pressure than the others, and once it went up further it was like riding on ice. Around here there is so much spin that you have to be careful about your tyre pressure, and we made a big mistake. When I caught a group of four riders at the end, I thought I could overtake them, but then I realised that I didn’t have the grip to get past. I was drifting when coming out of the corners. Sepang might be difficult for our bike, but we will go there trying to do our best.”