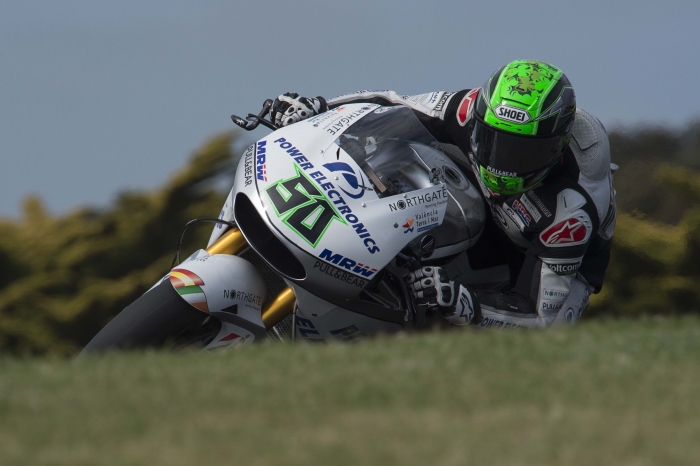 Marc Márquez, Andrea Iannone and Jorge Lorenzo will line up alongside each other on the front row of tomorrow’s starting grid for the MotoGP race at Phillip Island, after a qualifying session that saw the reigning World Champion back up his free practice domination with a pole position lap that was three tenths quicker than his closest rivals.

Iannone and Lorenzo clocked exactly the same lap time (1’28.680), the Italian making use of a slipstream from the Spaniard to edge him out for second place. Márquez is the clear favourite going into tomorrow’s race but all eyes will be on the battle between Lorenzo and Valentino Rossi, the series leader, who qualified seventh today.

After Nicky Hayden made a strong start yesterday whilst Eugene Laverty struggled, the reverse was true today in the POWER ELECTRONICS Aspar Team garage, where the Irishman took a major step forward with his set-up to find the grip and confidence he had been missing on the opening day.

After gradually building his pace today, a flying final lap moved Eugene up several positions to sixteenth on the grid.

16th Eugene Laverty 1.30.105:
“We took a good step today because yesterday afternoon we were really struggling with the bike spinning. We improved that today and to be so close to the top Open is pleasing. The main thing we changed was the set-up on the rear today. The way the bike performs with this particular tyre at this track is different to anywhere else so we have had to move in a different direction with the set-up and it has taken a little time. We found more stability today and that was the key. In Japan we struggled in practice but then I pulled a lap out of nowhere in qualifying that wasn’t a true reflection of our race potential. Here it is different because we made the progress we were looking for in FP4 and my race pace is good. There is not much in it between the Open bikes so hopefully we can have a good battle in the race tomorrow and the goal is to fight for that Open win.”