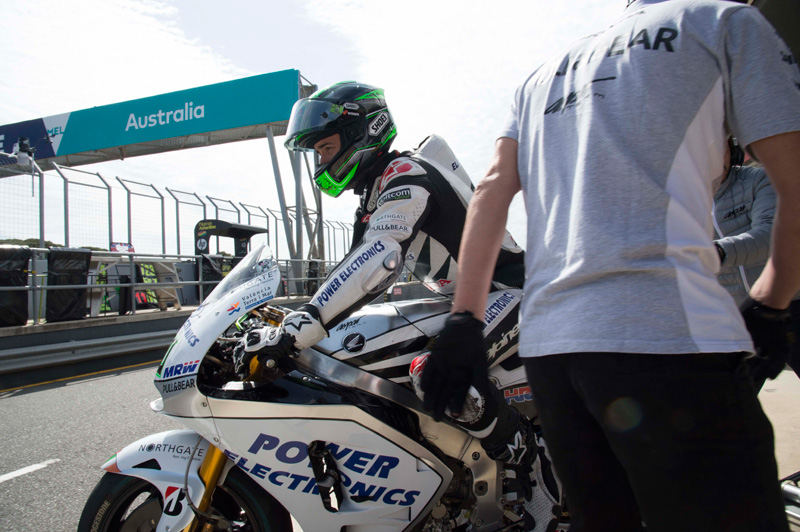 On the opening day of the Australian GP the MotoGP riders had contrasting fortunes to their Moto3 colleagues. Rain affected the first free session in the morning, but not in the second.

Lorenzo continued his good form from the last few races, leading the first practice and looked set to do the same in the second. In the afternoon however, things were different. The Mallorcan was around the top spots yet again, and in another tactic from his team-mate, Valentino Rossi, led his title rival around Phillip Island to add yet more spice to their battle for the MotoGP crown.

In the end it didn’t help the Italian too much, as he ended up ninth. In the last few minutes, with the sun shining and the temperatures rising, Lorenzo was surpassed by Marc Márquez. Just five hundredths separated the two Spaniards by the end, with times slower than expected on a day where the cold Australian winds blew hard.

Eugene Laverty likes Phillip Island a great deal, and put in some good work today in FP1 and FP2, but the afternoon session didn’t give him the kind of results he had hoped.

Struggling with a la lack of grip in the second half of the track, the Irishman ended up in 18th place. Despite everything, Eugene knows what he needs to do to improve tomorrow.

18th Eugene Laverty 1.30.910 (35 laps):
“I was definitely hoping for more this afternoon but I had so much spinning. I am losing time in areas where I didn’t expect. The bike is handling well, even when I followed Viñales I was able to gain time in the technical sections but then I lost so much in grip. The positive thing is that Nicky and Jack have shown the potential of this bike is high here but from our side we need to find some grip. In the right-handers it’s not so bad because we have the soft side of the tyre but on the left side, in general the second half of the track, the bike becomes unstable and I can’t open the gas without unsettling it. It is frustrating but we have some ideas for tomorrow. We also have a couple of other small areas to improve, like the gearbox, which is over revving because the rear is spinning so much. That held us back in some corners also but mainly it’s a case of finding grip.”