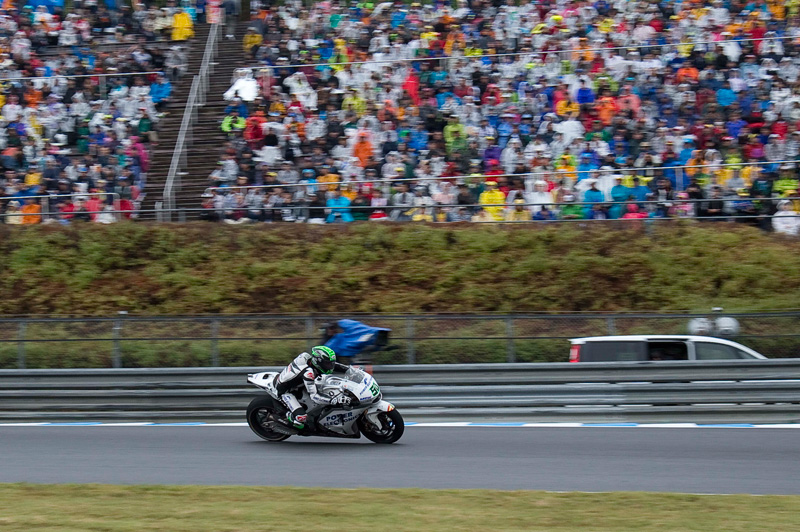 The weather forecasts predicting rain for race day at Motegi proved to be bang on the money today and even though it stopped in time for the MotoGP race the track remained damp, making for precarious conditions.

Jorge Lorenzo continued with his plan for the weekend of pushing hard in every session, opening up a two-second gap over his championship rival Valentino Rossi on the first three laps.

It looked like the top two positions would stay that way until Dani Pedrosa reeled in the Yamaha pair in the second half of the race, taking victory for Honda at their home track. Lorenzo then lost another position to Rossi, with the podium finishers taking the flag a long way ahead of the rest of the field.

POWER ELECTRONICS Aspar rider Eugene Laverty lost feeling as the race progressed and despite his positive start he eventually dropped back to finish the Motegi race in seventeenth.

17th – Eugene Laverty:
“It was a difficult race. At the start we were really strong in comparison to the wet race at Silverstone, where I didn’t have a good feeling in the early laps. I could stay with the guys but then when the spinning began and the tyre started to move around we got slower and slower and by the end the tyre was almost like a slick. We are still improving and we know the direction but we need to improve much, much more in the wet if we want to finish in the points. Maybe that’s the last wet race of the year, we don’t know. The positive thing from the weekend is the lap we set in the dry yesterday. I am in one piece and we move on to Phillip island now.”