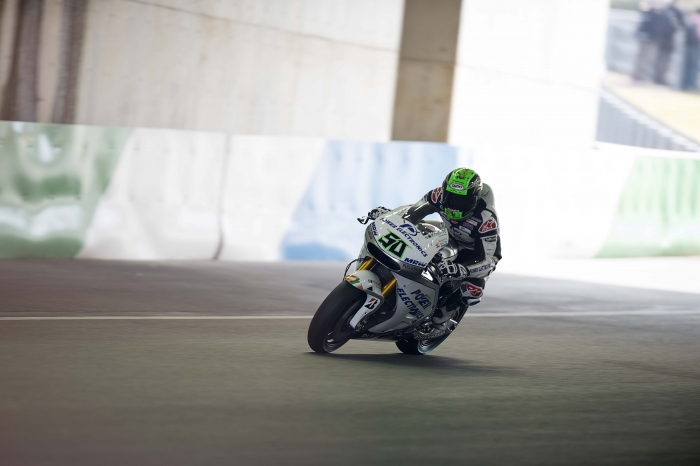 There was a major scare for the MotoGP riders at Motegi today at the end of the final free practice when a crash for Álex De Angelis saw the red flags drawn as the San Marino rider was evacuated from the track via ambulance and helicopter. Thankfully, the latest update from the paddock is reporting that De Angelis is conscious and stable despite the huge impact.

On track Jorge Lorenzo continued his dominance of this year’s Grand Prix of Japan with the fastest times in free practice, although qualifying did not turn out to be as straightforward as it seemed. His team-mate Valentino Rossi produced a thrilling challenge for pole position that only went the way of the Spaniard on the final lap, needing a perfect effort to overhaul the Italian by just 0.081 seconds.

The pair were the only riders capable of breaking into the 1’43s today as they prepare to continue their fierce battle for the title in tomorrow’s race.

The electric pace at the top of the order left the rest of the grid searching for silver linings and there were plenty to be found in the POWER ELECTRONICS Aspar garage, where Eugene Laverty and teammate Nicky Hayden made significant progress this afternoon to break the 1’46 barrier in qualifying.

To be just over two seconds off the stratospheric pace set by Lorenzo around such a long circuit as Motegi is certainly a positive but despite his pace today Eugene will nonetheless have his work cut out in tomorrow’s race, starting from 20th place on the grid.

20th Eugene Laverty 1.45.751:
“We managed to salvage the day because it started off really bad. I made a mistake and crashed after only a few laps this morning so the day started difficult but we regrouped and to do that lap time, a 1’45.7, I was on the ragged edge. I was surprised by the lap time because I was really struggling, the bike set up is not quite right so we have some work to do to improve for the race. It could be wet tomorrow so that changes everything, but if it’s dry then we need a dry warm-up because that lap in qualifying was really on the limit. We made some changes today and we understand the direction but it’s a question of whether we have enough time tomorrow to fix it. All I want is the same conditions in the warmup that we get in the race so that we can complete some work because we also need to find some rear grip in the wet.”