Eugene Laverty finishes in the points, and top Open at Aragon 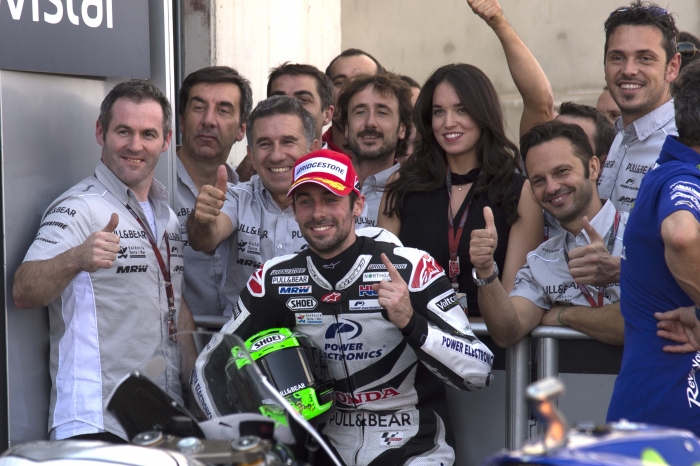 With the excellent pace shown yesterday by Marc Marquez and Jorge Lorenzo, it was almost certain that both would be fighting for victory today at the Aragon GP.

Lorenzo came out strong and Marquez followed. However, the latter surprisingly crashed out at turn twelve midway through the second lap, whilst Lorenzo set a new lap record -1.48.120- to open up an insurmountable gap.

Behind, Dani Pedrosa and Valentino Rossi battled for second. Five laps from the end, the Italian began to make his move, but Pedrosa held off every attempt from the Italian to place second. Rossi rounded off the podium.

Eugene Laverty took a result worthy of his improved performance since the return from the summer break. The POWER ELECTRONICS Aspar rider had marked the MotorLand circuit down as one that could be favourable for him, and that proved to be the case.

Yesterday he qualified as the top Open Class rider and today he continued with that form. Although he lost some positions at the start of the race, Laverty was able to keep a steady pace and fight in a very experienced group, climbing up places and defending his final position.

He crossed the finish line in fourteenth place, as the best Open Class rider on race day.

14th Eugene Laverty:
“I am very happy with the result in the race here at Aragon. The qualifying session yesterday was fantastic but it was just one lap, today was very important because we were strong in 23. I was used to fighting for the top positions and fighting to get into the points now is different, but the Open concept is something that helps us to stay motivated. I felt relaxed on the bike, and the bike was working better towards the end. I just rode my own race and focused on what I was doing. Even though we were battling for fourteenth, I treated it as if we were in the fight to win the race. That’s the way you have to approach it. Nicky is a great teammate and a great racer. You don’t know where he is going to be in practice; he might have a bad practice or a bad qualifying session, but then come Sunday he really puts it together for the race. He did just that today, and we had a great fight together. We have been doing a great job in the second half of the season and finally we were able to have something to show for it today, I hope to continue to progress in the upcoming rounds.”