Eugene qualifies as top Open rider for the first time 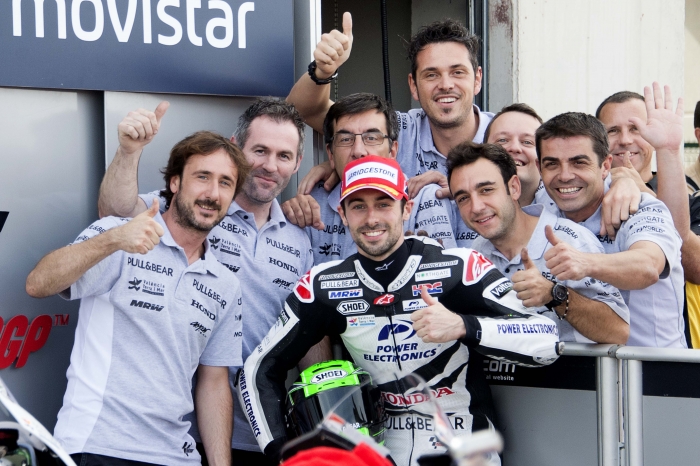 Yesterday Lorenzo led the way on the opening day of the GP of Aragon, and everything pointed to him repeating his dominance today, but the situation was markedly different in the end.

Marquez and Pedrosa concluded the morning session ahead of Mallorcan. In the afternoon Lorenzo dominated much of FP4 until Pedrosa took over with two laps to go. Marquez then in Q2 pulled an amazing lap out of the hat, smashing the lap record at this circuit (set by him last year).

Lorenzo pushed and pushed to get within a tenth but Marquez, despite falling at the start of the last lap, held on to pole. The two Spanish riders shone on home soil, taking the top two positions on the grid and recording great times, as the only riders to reach into 1’46 territory. They definitely have the best pace, but in racing anything can happen, just as we saw at Misano.

Today was a memorable day for the POWER ELECTRONICS Aspar riders and definitely the best Saturday so far this season. Both Eugene Laverty and Nicky Hayden achieved their best times in the qualifying session, and qualified in 15th and 16th places respectively.

Eugene Laverty had hoped that Motorland would suit his bike. Yesterday he did well in the morning but not so well in the afternoon, but today saw him make constant improvements.

After failing to break the 1’50 mark in the last two practice sessions, he improved by more than a second to secure 15th place and the best Open rider result in Q1.

15th 1.49.035 Eugene Laverty:
“This morning the pace wasn’t so good but the idea was to work on improving the setting to find some more edge grip, which we knew we would need this afternoon, so I wasn’t too concerned. The changes we made had the desired effect because we had more edge grip, even on the hard tyre, which was pleasing. It means we have a nice decision to make tomorrow because usually we go for the softer option but I like the stability the hard tyre offers and it is important here so we will see. At the minute we are 50/50.”