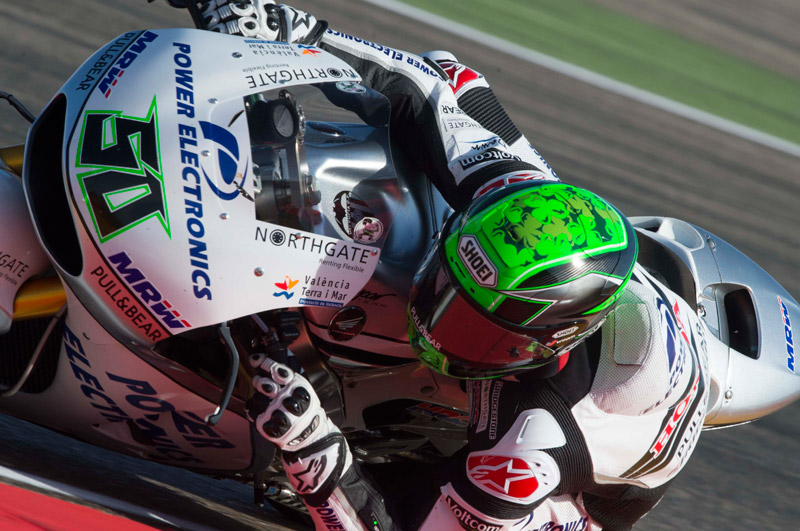 With just one victory in six years the Motorland circuit is said not to favour Yamaha machinery but that didn’t look to be the case today as Jorge Lorenzo dominated both of the opening two free practice sessions at the GP of Aragón.

With an advantage of seven tenths over his team-mate and title rival Valentino Rossi, Lorenzo made his intentions clear today as he closed in on the lap record (1’47.187 – Marquez) and established himself as a clear early favourite for victory on Sunday.

Eugene Laverty made the ideal start to his weekend with the eleventh fastest lap of the opening session this morning but the change in track temperature this afternoon had a negative effect on the POWER ELECTRONICS Aspar rider’s feeling and he dropped to eighteenth.

However, the Irishman is happy with the performance of his bike and he is confident his team can find a solution to make him more competitive in the afternoon heat tomorrow.

18th Eugene Laverty 1.49.769 (36 laps):
“It was a different track from this morning to this afternoon but this circuit is like that. It’s a bit like Jerez, the surface really changes with the heat. This morning we were in good shape with a bike that didn’t have the perfect setting, just some spinning which we fixed for the afternoon, but then with the change in track condition the side grip completely went away. We had a similar issue at Jerez and we managed to work around it so we have something in mind to try tomorrow afternoon. I have ridden this circuit before in Superbikes, the only difference is the final corner but I much prefer this layout – it’s a proper third gear corner with two apexes, where the harder you go in the better. It’s a lot of fun! In general I felt this track would suit our bike and it has proven to be the case, even more than I thought because the first gear corner is not as tough for us as I expected compared to the other bikes. We have had a strong Friday for the last few rounds now, the bike is the complete package and I can follow the factory Hondas in the majority of places. I think we are doing a reasonable job.”