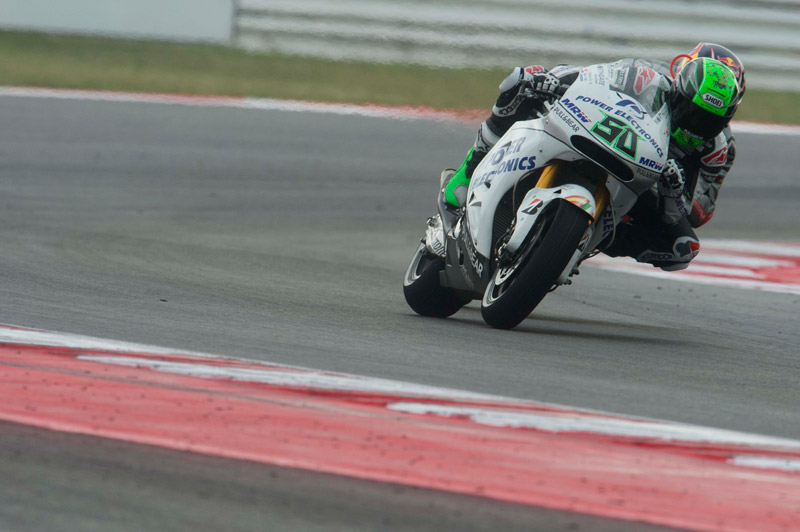 The MotoGP race at Misano today will long be remembered, after 28 chaotic laps that saw virtually all of the riders on the grid change bikes at least once. Only Bradley Smith finished the race without pitting after taking the gamble of staying out on slick tyres despite a rain shower just as the race started.

By the sixth lap the majority of riders had come in to change to wet tyres, by which time Lorenzo had escaped with Márquez and Rossi for company. On the following lap the lead trio came in to pit and as they returned on the slippery new Misano asphalt Márquez took the initiative, only to run wide and hand the lead back to Lorenzo. Rossi was in close contact and the veteran used his skills in precarious conditions to himself then open a gap over the pair.

As the laps went by and the rain ceased it soon became clear that the riders out on track on wet tyres would soon have to make a second pit stop and revert to slicks, with the first men coming back in on the thirteenth lap and Valentino Rossi staying out the longest, eventually pitting on lap 21.

What looked like an error from Rossi was soon overshadowed by an even bigger one from his team-mate Lorenzo, who crashed on the same lap, losing crucial championship points. Márquez played the best hand in a lottery of a race, taking victory from Smith, who was rewarded for his bravery with second place, and Scott Redding, who made it two Brits on the podium for the first time since the Grand Prix of Venezuela in 1979 (Sheene – Herron).

Unfortunately there was no winning ticket to the lottery in the POWER ELECTRONICS Aspar garage, where both Eugene Laverty and teammate Nicky Hayden could consider themselves hard done by the changing conditions.

Eugene Laverty produced his best pace from lap 18, when the Irishman found the grip in the dry that he had been looking for since Friday. However, it proved too little too late to mount a comeback and he had to settle for nineteenth position.

19th – Eugene Laverty:
“It’s always easy to look back on a race with hindsight and maybe we could have pitted earlier in the race but anything you do in this situation is a gamble and that’s the way it goes. It was a hero or zero kind of race and fair play to the boys on the podium but it could so easily have gone the other way for them. The biggest surprise for me was when I went back out on my dry bike again and the lap time and the feeling was incredible. I had so much grip it was like the bike I had on Friday again. Yesterday and also this morning I had zero front grip, I have no idea why. Today, I don’t know whether the rain had washed the dirt off the track or whether the Bridgestone wets had laid some rubber down but I had grip again. It’s something we need to look into but for me it was down to the surface. I said to the boys earlier this weekend that at least our race wouldn’t be spoiled by the rain again like Silverstone but maybe I shouldn’t have said anything! I was angry after Silverstone because I felt our bike suited the track and we were capable of a result there. I wasn’t sure Misano would suit us but actually we have shown good pace at certain points of the weekend so now we can go to Aragon and Phillip Island, two tracks that should be good for us, with optimism.”